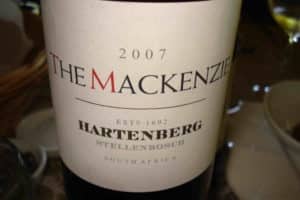 On Sunday, lunch spent drinking Platter’s 2011 5-Star laureate The Mackenzie 2007 at the Hartenberg Fête de la Fleur; yesterday a chance to examine 5-Star nominee Vilafonté Series C 2007 . Both Bordeaux-style reds, both aimed at the top of the market, the 2006 Mackenzie selling for R325 a bottle from the tasting room and the Series C for R370.

While the two wines are clearly very good in qualitative terms, it is striking how far apart they sit on the stylistic spectrum: Mackenzie is classically styled with dark fruit, bright acidity and firm but fine tannins; the Series C is modern in its weight and power with great flavour intensity (again lots of dark fruit) and smooth tannins.  What to attribute the differences to? No doubt the issue of site comes into it (Hartenberg is in the Bottelary ward of Stellenbosch while the Vilafonté vineyards are in Paarl), but I suspect the greatest determining factor is the contrasting aesthetic philosophies of Carl Schultz of Hartenberg and Vilafonté’s Zelma Long, who happens to be one of the USA’s best known winemakers.

The other point worth noting is how little Merlot features in each of the wines. Though the general quality of South African Merlot leaves much to be desired, Schultz is a dab hand at the variety, the 2004 of his single-variety bottling having won him the title of Diners Club Winemaker of the Year in 2005 while Long is somewhat baffled as to why the variety has such a poor reputation locally: “It’s a sensitive grape and it doesn’t grow just anywhere but it can be wonderful” (3.86ha of the 12ha under vine at Vilafonté tasting is Merlot).

Vilafonté tasting. All in a day’s work…

In Bordeaux, Merlot features in blends to provide wines with flesh and roundness and traditionally this is why the grape such an avid popular following. However, during Long’s presentation yesterday to mark the release of the Series C 2007 (and companion wine Series M), she showed a slide that according to analysis, Merlot had a higher tannin content than Cabernet Sauvignon for both the 2005 and 2007 vintages not just in the case of Vilafonté but for all properties evaluated.

All of a sudden, it starts making sense why the perennial criticism of local Merlot is that it is unduly astringent and why most of our top Bordeaux-style red blends are Cabernet Sauvignon driven (Kanonkop Paul Sauer 2007: 68% Cab, Meerlust Rubicon 2006: 74% Cab, Vergelegen Red 2004: 80% Cab).

Drinking the not previously rated 2015 recently shows what an exceptional vintage this was. A blend of 43% Malbec, 29% Merlot and 28% Cabernet Franc, the nose shows dark berries,...