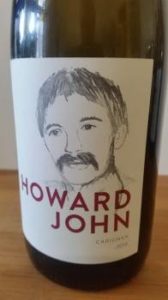 Franco Lourens, assistant to David Finlayson at Edgebaston, has his own label called Lourens Family Wines and the first release is a Carignan from older bush vines in Paarl and called Howard John after his father.

Typically high in acidity and tannins, it is nevertheless exceptionally productive and remains the most widely planted variety in souithern France. Plantings in South Africa are not extensive however, a mere 112.7ha in the ground at the end of 2014. “I’ve decided to work with varieties which are not widely known,” says Lourens.

Winemaking involved a portion of the grapes being whole-bunch fermented and fermentation occurred spontaneously, maturation lasting 12 months in old oak. Very dark in colour, the wine shows red and black fruit, spice and fynbos. It has a sweet ‘n sour character on the palate and the tannins are not too hard at all. Would it have been a better wine if the grapes had been picked a little earlier? Possibly but it’s not without charm as is. Approximate retail price: R155 a bottle.

Tim James recently highlighted the phenomenon of multiple winemakers using the same cellar (see here), and Hemelrand outside Hermanus is a case in point, home as it is to both...