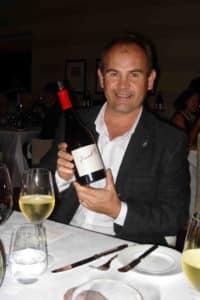 In the kitchen at the restaurant is chef Chris Erasmus, who previously worked with Margot Janse at acclaimed Le Quartier Français, and the style of cooking is Cape winelands deconstructed and premiumised, if you will. Anybody for a crayfish koeksister with your La Motte Cap Classique as an hors d’oeuvre?

As for the wine, it is a blend of 55% Shiraz, 29% Grenache, 8% Cinsaut and 8% Cabernet Sauvignon. It’s billed as “the very best that La Motte can make”, total production amounting to 250 cases and the wine apparently set to sell for $100 a bottle. Winemaker Edmund Terblanche recounts that it started out as something of an experiment: when the delivery of two 500-litre barrels intended for Chardonnay was delayed during the 2005 harvest, he decided to vinify some Shiraz from La Motte’s Bot River property in them.  After 30 months in barrel, the other components were added, Cabernet again from Bot River, Grenache form Darling and Cinsaut from Paarl. While Terblanche was convinced of the merit of the Shiraz, it was nevertheless very concentrated and tannic, and he says the role of the Grenache and Cinsaut is to “freshen” up the wine.

It’s luxuriously styled and a worthy addition to the canon of limited production, ultra-premium reds that have emerged over the last few years now (think Columella, Vergelegen V, Waterford The Jem). There’s nothing slight about it (it has an alcohol by volume of 14.71% and a residual sugar of 3.8 g/l) but it still presents as remarkably lively and balanced with red rather than black fruit and fine, spicy tannins. Proof once again that our top-end blends don’t necessarily have to include Pinotage to be authentically Cape.

La Motte Pierneef Syrah Viognier 2017 A blend of 95% Syrah, predominantly from Elim but including a small Walker Bay portion, and 5% Viognier from Franschhoek. Matured for 14 months...

That said, I increasingly accept the argument that not posting reviews of “lesser” wines leaves users of this site with no means of calibrating. What, for instance, would I make...

I’ve never quite known what to make of the top-of-the-range red blend called Hanneli R from La Motte and the current-release 2013 is no exception (price: R1 300 a bottle). Consisting...