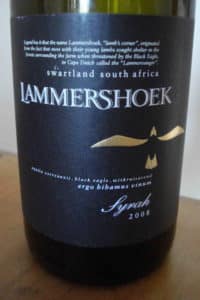 Lammershoek in the Swartland is top of the pops at the moment thanks to the 2009 vintage of its white blend Roulette Blanc being rated 5 Stars in Platter’s 2011. A major success like this serves as impetus to reconsider the rest of the wines in the range, and we recently drank the property’s Syrah 2008.

Its price tag of R120 a bottle suggests that those behind it consider it a relatively serious offering but I have to confess to being a little underwhelmed. The wine shows super-ripe fruit on nose and palate and seems to be short on freshness and tannic grip.

This is a common failing for me of many examples of the district’s Shiraz even though they  are generally much celebrated. Others at the table were enamoured with just how fruit-forward the Lammershoek was but I could have done with more complexity. New winemaker Craig Hawkins apparently promises more restraint going forward, which can only be a good thing.

At the recent launch of the Mysteries range from Swartland property Lammershoek, the white blend particularly attracted attention. A blend of Chenin Blanc, Viognier and Chardonnay, the nose shows citrus,...