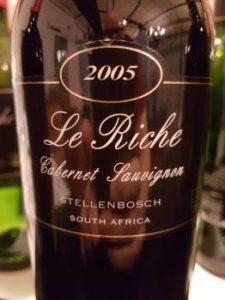 Discussion inevitably turned to changes in alcohol levels over time (the Reserve 1999 at 12.5% and the Reserve 2014 at 14.6%) and Christo le Riche, Etienne’s son and current winemaker, suggested that a whole gamut of factors might be responsible: virus-free planting material, clones which ripen earlier and better, more open canopies, more efficient yeasts, critical intolerance of “green” aromas and flavours and even the effects of climate change. Even so, he said that he and his father had tried to keep the approach to winemaking  as consistent as possible over time so the increase in alcohols left him “slightly baffled”.

The stand-out wine of the day was the 2005. On the nose, a top note of violets before red and black fruit plus a little earthiness in the background. In the mouth, it appeared medium bodied and none too developed, the finish long and gently savoury. Alcohol by volume? 14% which so often seems to be the sweet spot for Stellenbosch reds.

All this is to set the context for this year’s 10-Year-Old Wine Report, which came out last week. There were 74 wines tasted, with the best wine overall scoring 93...

The tree-lined drive up to the white gables of Meerlust our first stop, was quiet and peaceful ­– only the distant sounds of a horse shouting at the wind and the...