The luxurious and consequently not inexpensive Grande Roche in Paarl might have been an incongruous venue to judge entries submitted for inclusion in WINE magazine’s 2010 Best Value Wine Guide but pleasurable even so. With the process complete by lunch time yesterday, hotel GM Gawie Marx treated his fellow panel members to lunch on the veranda.

Each judge had to bring a bottle of interest, and so it was Shannon Sauvignon Blanc 2009 (courtesy of Ginette de Fleuriot) and Trizanne Sauvignon Blanc Semillon 2009 (thanks, Fiona McDonald) to accompany the salad with croutons and pine kernels.

On to the main course of pan fried kingklip with chorizo-bean-potato sauté and paprika foam, an excellent backdrop against which to taste Fleur du Cap Unfiltered Viognier 2007 (supplied by me), Eagles’ Nest Shiraz 2008 (cheers to Mark Norrish of guide sponsors Ultra Liquors) and Neil Ellis Vineyard Selection Grenache 2007 (big ups to Christine Rudman).

Friendly, if animated, debated quickly ensued. The Grenache 2007 was a 5-Star laureate in Platter’s 2010, the only one of its kind to be nominated let alone pick up the guide’s ultimate accolade. I suggested that while its 5-Star status was surely a surprise last year, the next vintage would in all likelihood be nominated again. Although the panel that confirms or refutes 5 Star ratings for Platter’s operates blind, anybody confronted with a single example of Grenache could at least take an educated guess as to its identity…

Rudman, an old hand when it comes to Platter’s, conceded that in the case of unusual varieties, deciding on wines from more unusual categories for 5 Stars, the exercise  did tend to become one of voting “yay or nay”, but made the point that in the bigger, more established categories, preconceptions of whatever sort on the part of those involved in the judging were not helpful. By way of example, she referred to 2010 guide’s nominations in the Cabernet Sauvignon category, some more predictable than others.  Le Riche Reserve 2005 and Boekenhoutskloof 2007 achieved 5 Stars; Bon Courage Inkará, Hoopenburg Integer 2006, Kanonkop 2006, Rustenberg Peter Barlow 2006, Stark-Condé Three Pines 2007, Waterford 2006 and Webersburg 2004 were put forward but ultimately fell short. 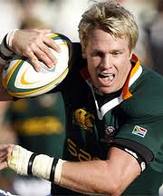 Springbok rugby – as controversial as Platter’s?

Before any definitive conclusions could be reached, we were distracted by the arrival of Springbok rubgy player Jean de Villiers, various team mates and WAGS to check into the hotel on the eve of De Villiers’s nuptials. Bemoaning the fortunes of the team’s performance in this year’s Tri-Nations was soon the next topic of conversation.

Not enough South African wineries maintain a proper vinoteque but Hemel-en-Aarde Valley winery Bouchard Finlayson does and a collection of older vintages designated as “Peter’s Pick” (Peter Finlayson being cellarmaster)...

When the 2016 Cape Winemakers Guild Auction wines were shown publically last year, the Pinot Noir over which most people went bananas was the Seadragon 2015 from Newton Johnson Family...