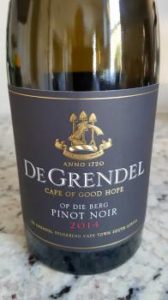 When the 2016 Cape Winemakers Guild Auction wines were shown publically last year, the Pinot Noir over which most people went bananas was the Seadragon 2015 from Newton Johnson Family Vineyards but the one to catch my eye (in a blind tasting put on for local media) was the Op Die Berg 2013 from De Grendel as made by Charles Hopkins.

Grapes come from the Witzenberg Mountains in Ceres, the vineyards 960m above sea level and the climate continental in nature, snow often falling in winter. The standard release 2014 is now out (R165 a bottle) and it again makes for interesting drinking.

On the nose, red and black fruit plus fresh herbs, earth and spice. The palate displays pure fruit, snappy acidity and firm but fine tannins. It’s a singular wine, quite reserved compared to most of what’s coming out of the wards of Hemel-en-Aarde or Elgin but holds your attention even so. Price: R165 a bottle.

New to the De Grendel range is Op Die Berg Syrah 2019, grapes from a young Ceres Plateau vineyard some 40km from its existing plantings of Chardonnay and Pinot Noir...