New vintages of the Eden High Density Single Vineyard wines from Bruwer Raats and Gavin Bruwer Slabbert have been released and while it was initially tempting to see this as a game-changing project, perhaps it is more appropriate to look at it more in terms of research and development.

For those that are unfamiliar with these wines, Raats adopted the mantra of “quality by design” and set about establishing 0.6ha of Chenin Blanc plus 0.2ha of Cabernet Franc from scratch on his Polkaidraai vineyard in the late 2000s, maiden vintage being 2014.

It is always insightful when a producer is prepared to show older vintages and here the 2014 and 2016 vintages where unquestionably of high quality but perhaps a little more developed than you might have hoped. There was no 2017 made after “kalander” (snout beetle) had their way with the vineyard. 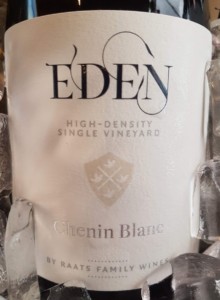 As for the 2018, the nose was enticing with top notes of jasmine and herbs before lime, white peach and apple while the palate showed pure fruit with zippy acidity and a pithy finish. It currently appears to be rather tightly wound and it will be interesting to see how it matures relative to its predecessors.

Regarding the various vintages of Cabernet Franc, the 2014 now looks a touch old-fashioned in terms of how concentrated and grippy it is – though single-variety Cab Franc is a rather niche category, it has been attracting a lot of attention for whatever reason recently and there have been some significant shifts towards a more elegant style driven by the likes of Lukas van Loggerenberg with his version called Breton and what Peter-Allan Finlayson is doing at Gabriëlskloof.

That said, I thought the Eden 2015 was a stupendously good wine on release (see here) and if anything, it’s got better with time in bottle – it has both the poise and intricacy that mark the very best wines in the world.

Raats declined to show the 2016 as he felt it’s currently looking a bit shut down and so on to the 2017. The nose is enchanting in its subtlety – notes of rose, red fruit, herbs, earth and pencil shavings come and go. The palate, meanwhile, is light bodied with pure fruit, fresh acidity and super-fine tannins. This is elegant and refined (alcohol: 13.5%) but doesn’t have quite the same profundity as the 2015 for me.

The Eden vineyards are two blocks established by Bruwer Raats just behind his Polkadraai house in the late 2000s with the aim of exploring what improvements in quality might be...