Savage The Girl Next Door Syrah 2017 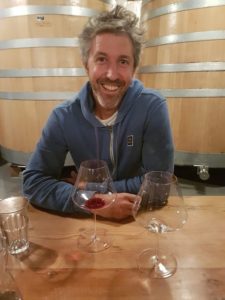 Duncan Savage, who established such a high reputation for himself making the wines of that singular Noordhoek property Cape Point Vineyards, now gets to roam the entire Cape winelands in search of grapes for his own label and though he insists he wants to focus more on “regionality” in the future, he has to date typically not bound himself to using any one particular site. As a result, his wines seem to be at the very forefront of unlocking the true potential of modern South Africa, his soon-to-be released 2017s fascinating in this regard. Tasting notes and ratings as follows (prices to be confirmed):

Savage White 2017
49% Sauvignon Blanc, 33% Semillion and 18% Chenin Blanc – sourced variously from Malgas, Villiersdorp, Piekenierskloof and Skurfberg. A floral top note before blackcurrant and naartjie. Super-rich on the palate – concentrated fruit, nicely coated acidity and a little tannic grip making for a pithy finish. This has plenty of heft but also lovely balance. Alcohol is 14% and Savage says more MLF than usual at somewhere between 50 to 60%.

Savage Red 2015
Released after the 2016 on account of the extra fruit power the vintage provided. 76% Stellenbosch Syrah, 9% Darling Cinsault, 9% Malgas Touriga Nacional and 6% Piekenierskloof Grenache. Very aromatic with notes of red and black berries, flowers and fynbos, earth, blood and spice. Great fruit definition, driving acidity and firm but fine tannins, the finish long and salty. The whole very much more than the sum of the parts – lots and lots of detail.

Savage Never Been Asked to Dance 2017
New. From Chenin Blanc (50% Malgas and 50% Paarl) and fermented on the skins for five days. The nose is quite shy with subtle notes of citrus and stone fruit plus some yeasty complexity while the palate is more about texture than flavour – tangy acidity and some tannic grip make for a funky but not too funky drop.

Savage Follow The Line 2017
W.O. Darling – 93% Cinsault and 7% Syrah. An enticing nose of cranberry, raspberry, fynbos and a hint of earth while the palate shows striking fruit purity, a lovely line of acidity and fine tannins, the finish again long and salty.  A wonderfully vivid and deftly realized wine.

Savage Thief in the Night 2017
New. 48% old-vine Piekenierskloof Grenache, 46% Cinsault and 6% Syrah. Red cherry, rose water and a hint of earth. The palate is markedly fruit-driven (despite 70% whole-bunch fermentation) – sweet in the best sense with bright acidity and fine tannins. An absolute pleasure to drink.

Savage The Girl Next Door Syrah 2017
From a Noordhoek Syrah vineyard planted by Savage. 50% whole-bunch fermentation and 13.5% alcohol. An utterly captivating nose of red fruit, lilies, herbs, white pepper, coriander and other spice. The palate is extraordinarily pure, fresh and lithe. Such composure, such length, this is a wine of real beauty. Only 760 bottles made so get your skates on.

Savage Are We There Yet? 2017
A 50:50 Syrah-Touriga Nacional blend from Malgas vineyards. Red and black berries, fresh herbs and earth on the nose while the palate is marked by dense fruit, tangy acidity and firm but not unduly coarse tannins. Plenty of heft, plenty of personality.

“The increments to be had in the cellar are tiny while they are infinite in the vineyard,” says Duncan Savage of Savage Wines who takes pride in working various sites...

Duncan Savage, sourcing grapes from across the Winelands and working out of his inner-city Salt River cellar, continues to make wonderfully characterful and refined wines. Tasting notes and ratings for...