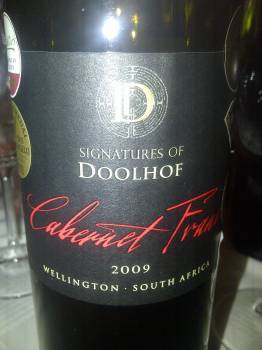 Doolhof, situated on the slopes above the Bovlei valley in Wellington, has some 36ha under vineyard, 70% of which is planted to Bordeaux varieties. Is it wise to be attempting premium Bordeaux in a district known as “Hellington” on account of its hot summers? Well, Rianie Strydom consults and when you recall the Bordeaux-style Premiere Selection she made at Morgenhof, it would seem the property at least has a fighting chance.

Much is made of the Signatures of Doolhof Malbec, and the 2011 (R119 a bottle) is pleasant enough with red and black fruit plus some not unattractive herbal character and oak spice (score: 86/100). A step up is the Cabernet Franc 2009 (R119) which has a shade more detail including that floral note typical of the variety and better balance (score: 87/100).

The Legends of the Labyrinth range includes a Cape Blend called The Minotaur, the current release 2009 (R180) somewhat over-reaching itself appearing rather big, sweet and lacking verve (score: 85/100). Theseus 2009 (after the king of Athens who slayed the mythical minotaur) is the farm’s flagship Boredeaux-style red (R235) and is a bit better realised but still in a very rich, full style (score: 86/100).

Current owner Dennis Kerrison acquired the property in 2003 and admits to still feeling his way. All other things being equal, I’d jettison the Cape Blend (generally a peculiar category) and concentrate on making a top single-variety Pinotage. The Bordeaux-style blend must surely be an option as long as “finesse” is the watchword and then the farm also has Shiraz currently destined for rosé – I’d identify the best vineyards and then blend it with Cab – it’s a combo which doesn’t get nearly enough credit and my instinct is that it could work well here.

Haskell Vineyards in Stellenbosch has appointed Rudolph Steenkamp, previously assistant winemaker at Groot Constantia, as winemaker and vineyard manager. He replaces Rianie Strydom, who departs to concentrate on her own...

Rianie Strydom has this way of focusing her attention on you that makes you feel that what you’re saying is important. A conversation with her is empowering. I imagine this...

Results of the Absa Perold Cape Blend Competition 2015 were announced today. There were 42 entries in total and the top five wines are as follows: Anura LB Cape Blend...