Koen Roose, winemaker at Spioenkop in Elgin, makes two versions of what might be called new-wave Pinotage, one under the “1900” label which sees a small portion of own fruit in combination with that from Stellenbosch  and another that is exclusively own fruit.

Until now, I’ve found the “1900” version more complete and the Elgin-only a little underdone but that all changes with the wines from the 2015 vintage.

Spioenkop 1900 Pinotage 2015
Price: R250
80% Stellenbosch, 20% Elgin. Matured for 12 months in French oak, 45% new. The nose currently appears intensely floral but there’s also red cherry in evidence. The palate shows plenty of sweet fruit that is so typical of the variety while the acidity is fresh and the tannins fine. It’s a very sexy wine but arguably missing a bit on the mid-palate. 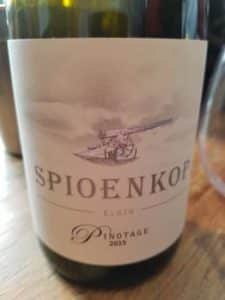 Too cool for school.

Spioenkop Elgin Pinotage 2015
Price: R350
Three pickings. Matured for nine months in French oak, 50% new and then a further three months in 100% Sequin Moreau. Red and black fruit, fynbos and spice on the nose. Terrific concentration without being at all weighty. The other fundamental traits all present and correct, the acidity suitably fresh and the tannins nicely grippy. Really well executed.

Koen Roose, originally from Belguim, farms a hilltop in the middle of Elgin, he planted two vines in the early 2000s. A qualified engineer and former sommelier, his wines reflect...

Koen Roose, who has had previous careers as both an engineer and a sommelier, continues his quixotic activities on his Elgin property, his wines never pandering to mainstream tastes. Tasting...