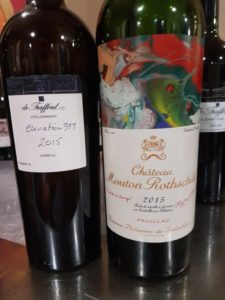 David Trafford of De Trafford in Stellenbosch recently hosted a tasting that pitched Cabernet Sauvignon-based wines from Stellenbosch against some leading examples from Bordeaux, all from the 2015 vintage. Five flights of two, those attending asked to identify 1) their favourite and 2) which wine was from Bordeaux in each instance. The wines were as follows:

It was more difficult to differentiate the Stellenbosch wines from the Bordeaux than I had expected – I correctly identified the Pichon and Mouton but mistook the Domaine de Chevalier, Pontet Canet and Calon Ségur as South African. Those attending taken as a group were typically divided down the middle as to which was which.

The Mouton was extraordinarily good. Red and black fruit, a subtle herbal note, attractive oak and oyster shell on the nose while the palate was medium bodied yet still possessing a weightless intensity – pure fruit, fresh acidity and fine tannins. So precise and wonderfully energetic.

The De Trafford CWG Perspective 2015 was a revelation on the night. Whereas the standard-release Elevation 393 always contains a portion of Syrah (Trafford reckons this variety is a better representation of his property), Perspective holds true to the varieties permitted in Bordeaux, the 2015 being a blend of 67% Merlot and 33% Cabernet Sauvignon.  Cassis, violets, fresh herbs including mint in the best sense, earth and spice on the nose. Full-bodied but balanced with a great core of fruit and nicely grippy tannins. A big, powerful wine (alcohol: 14.94%) that should go a long time.

To end the tasting, Chateau Haut Brion 2011 poured next to De Trafford Elevation 393 2012. Here it was relatively easy to tell the Bordeaux from the Stellenbosch wine, the former more intricate and savoury (94 points) relative to the weight and power of the latter (92 points).

While scratching around the Bottelary Hills looking for some old vine Chenin Blanc in the lead-up to the 2019 harvest, David Trafford came upon a rare block of bush-vine Chardonnay...