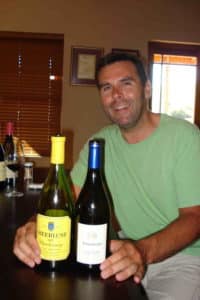 Yesterday lunch with Johan Kruger of Bottelary property Sterhuis. “No Sauvignon Blanc and salad. This isn’t Durbanville and we aren’t rabbits,” he said. Meat was supplied by Daneel and Ruaan Liebenberg of Joey’s Vleisprodukte in Brackenfell consisting of T-bones, imported free-range ribeye from Namibia and their signature beef brisket boerewors. We dispensed with the notion of “white wine with white meat , red wine with red meat” and stuck to Chardonnay. Accompaniments were boiled potatoes and potato salad. It was that kind of day.

Wines of the day were Sterhuis 2007 drunk next to a Meerlust 2007, both possessing easily enough weight and texture to standard up to the meat. In taste profile remarkably alike, the Sterhuis a touch riper and showing just a little more tropical fruit compared to the Meerlust which had an appealing nuttiness to it. In terms of vinification, again very similar approaches, the Sterhuis undergoing completely natural ferment and receiving 12 months in oak, 65% new; the Meerlust half natural ferment and getting 11 months in oak, 60% new.

The Callender Peak 2007, also made by Kruger from grapes grown near the Agterwitzenberg near Ceres has impressed me before but now seems a bit tired. That received 16 months in oak, 100% new, which was perhaps a bit ambitious. Less is so very often more when it comes to time in barrel.

Chris Williams, winemaker at Meerlust Estate in Stellenbosch since 2004, has resigned to pursue his own interests. He was only the second winemaker at the property, succeeding the renowned Giorgio...