Bistro 13 is the Stellenbosch restaurant started by chef Nic van Wyk just over a year ago. Yesterday, during a lunch to showcase some of the dishes to feature on the menu this summer, Van Wyk revealed that Proteas cricketer Faf du Plessis recently became an investor in the enterprise. Du Plessis has also launched his own wine label, said Van Wyk, and would we like to try it? 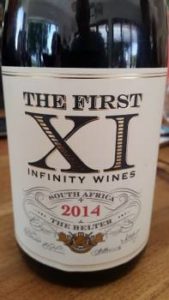 The First XI The Belter 2014 sees Du Plessis in partnership with fellow Proteas teammate AB de Villiers, Stephen Fleming formerly of New Zealand and Mike Hussey, formerly of Australia. The wine was made at Rickety Bridge in Franschhoek and is a blend of Shiraz, Mourvèdre, Grenache, Cinsault, Tannat and Viognier.

It shows red fruit, peach, vanilla and spice with a fynbos top note. It’s flamboyant – fruit-forward with soft tannins. Not a duck but not a century either. More like 87, caught on the boundary after playing a slog-sweep trying to impress the WAGS in the luxury suite. Available from Rickety Bridge at R160 a bottle.

The First XI The Partnership 2014

Today the launch of the new  eatery in the old stables of Durbanville property winery Diemersdal – heading up the kitchen is Nic van Wyk, previously of Terroir and Kleine...