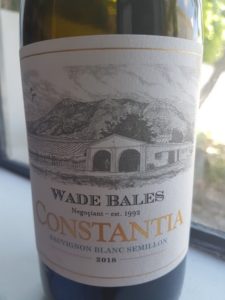 Wade Bales, négociant and owner of Wade Bales Fine Wines & Spirits, believes that South Africa’s wine regions go under-promoted and towards rectifying this situation, has launched a regional series of wines, the first release being the Constantia White 2018.

It’s a blend of 67% Sauvignon Blanc and 33% Semillon, this being what Bales believes is the signature style of the appellation. The wine was made as a collaborative project between the winemakers of seven Constantia properties, namely Brad Paton of Buitenverwachting, Justin van Wyk of Constantia Glen, Jacques du Plessis of Constantia Uitsig (subsequently departed for Oak Valley), Boela Gerber of Groot Constantia, Matthew Day of Klein Constantia, Gregory Brink Louw of Silvermist and JD Pretorius of Steenberg (set to take up a position at Warwick in due course).

It’s a stylish offering. Herbs, pear, white peach and lime on the nose while the palate is pure and precise with fresh acidity and a salty finish. It drinks well enough now but should fill out and gain extra complexity with 12 months in bottle. Total production: 900 six-bottle cases. Price: R220 a bottle.

This is the second in the regional series from Wade Bales, négociant and owner of Wade Bales Fine Wines and Spirits (the first being a Sauv-Sem blend from Constantia). Combining...

Up, up and away – the premiumisation of Sauvignon Blanc

From the December issue of Business Day WANTED: No wonder Sauvignon Blanc is so many people’s favourite summertime wine – consumption-ready on purchase (no need to age it before drinking)...

The winning wines in this year’s FNB Sauvignon Blanc Top 10 Competition are as follows: Bergsig Woolworths [WHAT]? 2011 Woolworths price: R39.95 100% Breedekloof. Somewhat shy on the nose but...