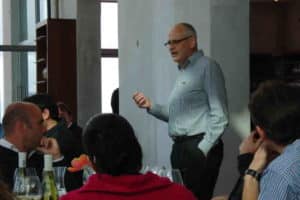 Paul Boutinot, one of the UK’s leading wine importers, set out in 1993 to search the world for a site capable of producing “truly fine wine with a defining sense of origin”. It would take him 10 years to find what he was looking for, and that was Waterkloof on the south-facing slopes of the Schaapenberg near Somerset West. “I knew it had potential. Not on the basis of scientific appraisal but rather a gut-feeling”.

Boutinot took transfer of the property just before the 2004 harvest, but the first vintage that was bottled under the Waterkloof name was from the 2005 harvest. Those who follow the Sauvignon Blanc category closely will be aware that the example under the top-end Waterkloof label is quickly establishing itself as one of the country’s most accomplished. The currently available 2009 was whole bunch pressed and underwent natural ferment, a portion (45%) undergoing fermentation in old 600l barrels. This is not winemaking by rote. Total production is 400 cases and the wine sells for R155 a bottle.

Now comes the Circle of Life White 2009. You might be forgiven for thinking this becomes the property’s flagship  (swish packaging, blends often positioned at the apex of a range) but Boutinot is adamant that the single-variety Sauvignon is “the best wine we make”.

The name, Boutinot admits, is a bit kitsch and confesses that he was unaware of the eponymously titled song from the 1994 Disney movie The Lion King (music by Elton John, lyrics by Time Rice). Nevertheless, Boutinot, winemaker Werner Engelbrecht and team are committed to sustainable farming  (no herbicides, fungicides or pesticides in the vineyards and a Percheron mare rather than tractors to help with soil preparation, for instance). “We are not creators, merely caretakers. We can’t bring to the fore anything that wasn’t there already,” notes Engelbrecht.

Circle of Life is not made according to the Bordeaux white-blend template (you feel that this would’ve been far too derivative for Boutinot and co.) and is conceived to be a reflection of the property (or at least the area:  the Chenin that features in the 2009 was bought in from a neighbour as what’s planted on Waterkloof has yet to start bearing).

Boutinot is loathe to let on precisely the proportions of the blend as if this might rob the wine of some of its mystique. “60% Sauvignon Blanc, 20% Chenin Blanc and 10% Semillon. If you write that down, it’s close enough”. Generally, he feels Chenin is a better variety than Sauvignon in terms of structure but reckons Waterkloof produces Sauvingon of at least similar structure, which he finds “very unusual”.  The role of the Semillon? “We try to avoid anything obvious about the wine”.

Again, whole bunch pressing and natural ferment, the Chenin Blanc and Semillon spending 11 months in old 600l barrels, while the Sauvignon Blanc was fermented in tank, although a portion had to be moved to barrel, when it appeared the ferment might become stuck.

The wine currently shows good purity of fruit balanced by a vivid line of acidity, but I have the sense that  is too young by at least 12 months. Regarding a later release, Boutinot declares himself too impatient. “I like wines that are too young. I like wines that you have to work at.” Indeed, during the launch function lunch, where it was served with tuna in a breadcrumb crust with risotto-style potatoes, the wine changed constantly while drinking it. “Great wine should not be static or decline in the glass. It must continually call you back,” he says.

Of course, there’s also a financial aspect to a delayed release. “If I were to hold it back for year, and taking into account South African interest rates, then I would have to charge 20% more a bottle to make a profit”. As it is, it has a recommended retail price of R140.

Significantly, Circle of Life is closed with screwcap and Waterkloof Sauvignon Blanc cork. “I’ve being doing tests for 25 years:  Cork is better than screwcap when it comes to ageing, and our Sauvignon Blanc is designed to age for at least 10 years,” say Boutinot.  “However, that presumes the cork is not faulty to start with.”

Cinsault is all the rage right now but to drink the Seriously Cool 2018 from Waterkloof is to be reminded that this is in most instances a workhorse rather than...