The 36th Nederburg Auction takes place on 3 and 4 September and organisers Distell are apparently confident that they can reverse the negative trends that the event has shown in recent years: despite a decline in total auction sales every year since 2005, there will be more wine on offer in 2010 than there has been for some time – some 5 720 cases from over 160 producers.

Yesterday saw a media pre-auction tasting of some of the wines to go on sale. The primary purpose of the auction is to ensure the fair allocation of rare bottlings and all local producers are invited to submit wines for potential listing. A panel consisting of Distell wine buyers and Cape Wine Masters applies a simple “in or out” system and approximately only 40% of what’s put forward gets selected.

Part of Nederburg cellarmaster Razvan Macici’s brief is to make wines exclusively for the auction, and he notes that out of all the judging and assessment that his wines are subjected to, the auction selection process is the one that he treats with most trepidation. “If I enter a competition, I may or may not get a medal. If I submit a wine for auction and it doesn’t get approved, then it must be decanted or blended away. Basically it will never see commercial release”.

Once again, it struck me that when considering the modern era, South Africa generally does seem to make better white than red wines. This is something with which Macici more or less concurs, his explanation being that white varietal vineyards are “in better balance” with regards canopies and root systems. Neil Pendock, my regular interlocutor over at the Sunday Times. thinks this is all nonsense, however, on the basis that reds fetch far higher prices, a clear indication of how the market views relative quality, and the market is never wrong… 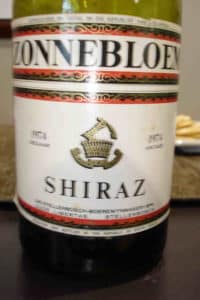 Regardless, wine of the tasting for me was a red, namely Zonnebloem Shiraz 1974. Though labelled as a single varietal wine, legislation back then was sufficiently lax back then to allow the wine to contain 25% Cabernet Sauvignon and 10% Cinsaut. What impressed about it was how it did not decline in the glass over time but continued to reveal more dimensions of aroma and flavour. There are those that are inclined to dismiss what Marc Kent of Boekenhoutskloof is currently  trying to do with The Chocolate Block, but it is interesting to note that it is not a million miles away in terms of composition, the 2008 consisting of 69% Shiraz, 13% Grenache, 10% Cabernet Sauvignon, 7% Cinsaut and 2% Viognier.

The Chocolate Block from Boekenhoutskloof has always been at least sound, and in the case of 2017 rather accomplished, but the 2019 seems slightly ingratiating, conceived to please as many...

Marc Kent, Boekenhoutskloof cellarmaster for over 25 years and its effective director for many of those (and a major shareholder in the brand), no longer concerns himself with “dragging pipes...