Starting in 2015, Tim Atkin MW and Samantha O’Keefe of Lismore  Estate Vineyards in Greyton  have taken it upon  themselves to arrange a tasting where the best of South African wine are put up next to some leading examples from the rest of the world in order to facilitate discussion.

The most recent event  featuring Pinot Noir took place at Lismore this past Saturday and those in attendance included me, Atkin and O’Keefe plus Nadia Barnard of Waterkloof, Andries Burger of Paul Cluver Estate, Alex Dale of the Winery of Good Hope, JC Martin of Creation Wines, Gottfried Mocke of Boekenhoutskloof, Gordon and Nadia Newton Johnson of Newton Johnson Vineyards, Emul Ross of Hamilton Russell Vineyards, Hannes Storm of Storm Wines and Chris Williams of Meerlust and The Foundry. We tasted blind and scored using the 100-point system. 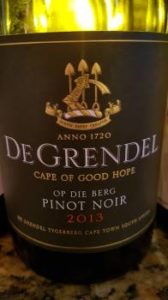 The overall top 10 was as follows:

Some observations: Picking country of origin was difficult – we live in a world where knowledge transfer is now extraordinarily fast and a technique which yields good results in one region is soon replicated around the world, the upshot being that winemaking approach often trumps site or at least obscures it.

Much debate about what stylistic manifestation constituted the best expression of the variety. The general feeling was that the wines which displayed red rather than black fruit and were more medium rather than full bodied tended to be more successful. Dale of The Winery of Good Hope argued, however, that such wines could tend to be a little frivolous and that there was a place for a more powerful rendition of the variety. It was generally agreed that wines with more fruit power were legitimate as long as they provided an overall impression of being dry rather than sweet.

Picking up on this point, O’Keefe felt that some degree of herbaceousness in Pinot Noir was no bad thing as it went towards savouriness. Again, the feeling was that this was a valid part of the overall drinking experience as long as it was in balance. Also, this herbaceousness should be terroir-derived rather than being the product of leaf-roll virus or under-ripe picking.

Lastly, many of the wines showed some degree of reduction. At low levels, this adds complexity but there were some wines were the consensus was that this was excessive, the Dujac Morey-St-Denis Premier Cru 2012 being a case in point.

It has to be said that South Africa acquitted itself well in this tasting and there is definitely a future for the variety locally, perhaps more so than this commentator has previously thought. Even so, the wines were extremely diverse in stylistic terms and we are long way off from claiming coherent regional identities.

Paul Clüver of Paul Clüver Family Wines in Elgin relates that Chardonnay is particularly prone to delayed foliation and, in turn, uneven fruit set, something that is exacerbated by mild...