There are remarkably few old chardonnay vines in the Cape. On her old-vine website, viticulturist Rosa Kruger lists just one block over 35 years old: less than three hectares, planted in Stellenbosch in 1975; and Rosa isn’t quite sure if that still survives – she’s following it up now. In fact, there’s even more old-vine cab franc around, and chenel (that undistinguished local crossing of chenin and ugni blanc), than there is of chardonnay.

It’s not entirely surprising; the variety doesn’t have a long history here. When some ambitious local growers were wanting to make chardonnay wines in the 1970s, there was only badly virused and diseased material available; to avoid lengthy bureaucratic delays in importing, they turned, notoriously, to illegal means – though some of what the smugglers brought in turned out to be the inferior auxerrois, which added some farce to the scandal. In the 1980 edition of the Platter guide, only one chardonnay was listed, from DeWetshof in Robertson.

Only in the 1980s did good plant material become readily available, and there are indeed some chardonnay vineyards surviving from that decade. I started looking up this stuff because Grant Dodd, GM of Haskell Vineyards in Stellenbosch was wondering about the historical place of the vines producing grapes for the excellent Haskell Anvil Chardonnay. There are two parts to the Anvil vineyard: one planted in 1988, the other in 1992. That puts them amongst the oldest local survivors, apart from that uncertain vineyard in Stellenbosch and one other, of which more shortly.

There’s another 28-year old chardonnay block, however: the Kaaimansgat vineyard in the wonderfully surprising Elandskloof valley near Villiersdorp in the Overberg. The best-known wine off this vineyard is, of course, the one from Bouchard Finlayson bearing its name (and/or its translation, Crocodile’s Lair). 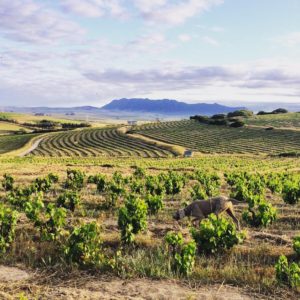 More surprising, however, is a 1981 vineyard in, of all places, the Swartland, planted at Lammershoek on the Paardeberg. Chardonnay’s not a grape widely associated with that now-fashionable and always-warm region, but some of the Lammershoek fruit went into early vintages of Eben Sadie’s groundbreaking white blend, Palladius, and has also featured in Lammershoek’s own fine whites.

Most of my recall these days is vague, and I vaguely remembered hearing that the Hungarian aristocrat Desiderius Pongrácz who became an important viticulturist in the Cape (and whose name survives in Distell’s top sparkling wine) was somehow involved with this vineyard. So I turned to Albert Ahrens, who was Lammershoek winemaker for much of the century’s first decade. He told me that certainly Pongrácz had been much involved at Lammershoek, as he was a personal friend of the estate’s then owner, Albertus Mostert.

Incidentally, when Albert moved into the old Mostert house, he found amongst the abandoned detritus there a book inscribed by Pongrácz to Mostert, thanking him for his support in establishing sauvignon blanc and carignan. I’m wandering from my story, I know, but sauvignon blanc seems even less associable with the Swartland than does chardonnay – although the country’s oldest sauvignon is from Spice Route’s Amos block, planted in 1965. I wonder if Pongrácz had any hand in that. As to carignan, Albert tells me that Lammershoek’s venerable carignan vineyard, dating to 1976, was established under the oversight of Pongrácz, with experimental aims: apparently the vines were planted on 20 different rootstocks. (His book on “Rootstocks for grape-vines” was published in 1983.)

It’s not known if Pongrácz was involved in Lammershoek’s 1981 chardonnay vineyard, but it seems likely. The chardonnay scandal was unfurling – I wonder what were the origins of the Lammershoek vines. A further, sad connection between our Hungarian refugee and this grape variety that escaped from Burgundy is given on the Pongrácz MCC website: Pongrácz died in 1985 “at the age of 61 in hospital after a tragic accident while transporting Chardonnay vines to Uitkyk Estate”. The chardonnay scandal was intensifying as his ashes were interred on Meerlust Estate.

It’s all these connections and surprises that make up the elusive texture of Cape wine culture – so little recorded, explored and known.