No conversation about South African olive oil can take place without the mention of RIO LARGO. This olive oil is South Africa’s top award winner since 2010 and loved by many. RIO LARGO is Portuguese for ‘broad river’ and this estate is situated on the southern banks of the Breede River, in the Scherpenheuwel Valley between Worcester and Robertson. 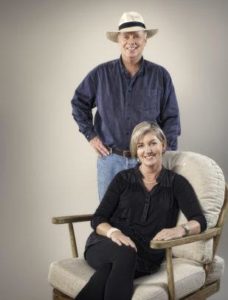 Originally developed in 2003 by Carlos Raposo, the farm and brand were purchased by Nick and Brenda Wilkinson in 2010. Although Nick had not worked with olives before, he had significant experience in international agribusiness. Nick is a chartered accountant and for 20 years was based in Central Africa where he specialised in rescuing failed large-scale farming enterprises.

But running a profitable olive farm does not come from just making good olive oil. The olive oil needs to be sold. Brenda, a qualified teacher, with a little experience in marketing, took on the challenge to share RIO LARGO. It was a challenge that took her on a new adventure learning about markets, media, distribution and customer service. Remarkably up until now, this sought-after olive oil was seldom spotted on supermarket shelves. Those seeking RIO LARGO extra virgin olive oil had to look out for it in high-end delis or contact the estate directly. By request, it is now available countrywide at Checkers. RIO LARGO is also being enjoyed internationally as new markets are discovered.

With a lifestyle change prescribed by his GP as his weight, blood pressure and cholesterol were at less than ideal levels, and with daughters studying at Stellenbosch University, Nick and Brenda decided to relocate to the Western Cape where Nick had previously researched farming enterprises.

But what made them choose olives? “Olives kind of fell into my lap after disregarding all the other fruits grown in the Western Cape which carried a higher risk profile. Olives could be grown, processed and sold into the retail sector from the farm, with no need for a cold chain”, says Nick.

Nick invested in a state of the art Italian olive processing plant with sufficient capacity to process the olives within hours of picking. RIO LARGO uses only Italian olive cultivars including Frantoio, Leccino, FS-17 and Coratina. The olives are hand-picked early in the season, when the olives are greener, to ensure the highest possible levels of polyphenols, vitamins and anti-oxidants. Nick and Brenda have both experienced the health benefits of good quality olive oil and are passionate about sharing the message.

Nick has been chairman of the SA Olive Association since 2013. The organisation fulfils various functions including monitoring the quality of South African olive oils to ensure they remain at the high level for which they have become famous worldwide. Each year the Association hosts the SA Olive Awards, which recognises the quality of the participating oils with gold, silver and bronze medals. RIO LARGO oil has been a top performer at this competition, and many others locally and abroad.

Will Nick continue to produce olive oil for the foreseeable future? It seems so as in his words: “Do I miss the race of time, the daily grind, chasing the proverbial pot of gold at the end of the rainbow? No, I create something worthwhile with my own hands and it’s good, really good.”