Olive oil being a product of a fruit, unlike wine, does not mature with age and is at its best straight after pressing. The fresher the olive oil the better. There are so many health benefits that olive oil provides when consumed, as with the flavor of olive oil, these benefits start to degrade over a period of time. For optimal benefits olive oil should be consumed within six months of production, and will have degraded to a great extent 18 months after production. This is often a problem with imported oils. While they may have been produced as extra virgin oil, they have been travelling and sitting in warehouses for so long that they have lost most of their health benefits.
While time is really the greatest enemy to olive oil, there are other factors that affect the degradation of olive oils. To get the most out of your olive oil, follow these tips that will assist in slowing down the deterioration, or oxidisation of the oil over time:

1. Avoid Heat: Keep your olive oil in a cool place, away from the oven and any other sources of heat. When olive oil is exposed to heat over time, the compounds that cause pleasant flavours and aromas change and instead cause unpleasant ones. Rancidity develops sooner and free fatty acid levels rise faster.

3. Protect from Light: Keep your olive oil in a dark place as light speeds up the oxidation process. Exposure to light also causes a substantial loss of antioxidants, especially tocopherols, and an increase in rancidity compared to oil stored in the dark. For extra protection, make sure you buy oils which come in darker bottles which allow less light.

4. Oxygen is the Enemy: Keep your olive oil in a sealed bottle making sure the lid is always on properly. Oxygen is an enemy of the oil and producers are careful to minimise contact time between oxygen and oil during the production process. As with light and heat, when exposed to oxygen, rancidity starts to develop and olive oil’s flavour properties significantly decline. 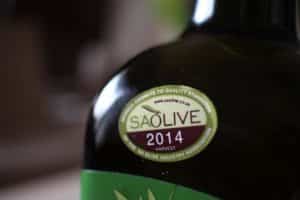 As a consumer, it is important to pay attention to what oil you purchase in order to get the most benefits. Look for products that have the CTC Seal. The SA Olive Association has implemented the CTC (Commitment To Compliance) programme, where members of the association label their olive oil with the year of harvest. Olives are harvested in the first half of the year, so calculate the age of the oil from around June of the harvest year until the current month.