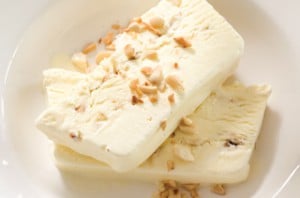 There’s nothing as stressful as making ice-cream from scratch, unless of course you’re the proud owner of a machine that costs gazillions of rands, into which you bung the ingredients and – before you can chill the accompanying bubbly – out comes professional, creamy-dreamy ice-cream for the masses.

Traditional ice-creams involve making custard (with eggs and real cream, no less, which have a nasty tendency to curdle) followed by lengthy into-the-freezer, out-of-the-freezer instructions. Between bouts in the freezer, there is enough whipping and beating to cause real bodily harm like whiplash and tennis elbow.

Fret no more. This is the only ice-cream recipe you’ll ever need. It contains soul-soothing ingredients such as eggs, cream, sugar, honey and condensed milk, with the added crunch of almonds. But please use blanched almonds, not the flaked sort that taste like cardboard when they’re frozen.

The wondrous thing (beside the taste and seductive texture) is that no re-whipping is required. Just rustle it up, freeze it and – at the magic moment – upend it onto a plate to slice and serve.

Method
Roast the almonds in a dry frying pan until golden and aromatic. Set aside to cool.

Beat together the condensed milk and egg yolks in a large bowl. A hand-held whisk is fine for this part of the proceedings.

In a separate bowl, whisk the egg whites stiffly (time to bring out the electric mixer). Beat in the castor sugar very, very well. Spoon onto the condensed milk mixture.

Pour the cream into the bowl in which you’ve whisked the egg whites, and whip to stiff peaks. Add to the condensed milk and egg whites. Fold everything together gently, using bags of tender loving care and a large metal spoon. The aim is to keep in as much beaten air as possible to ensure light-as-a-feather ice-cream.

To serve
Dip the loaf tin or bowl very briefly into hot water and turn the ice-cream out onto a platter. Slice and serve, dipping your knife in hot water so it glides smoothly. Offer extra roasted nuts in a bowl for those who’d like a few more.

WINE PAIRING
A golden rule when partnering wine with dessert is that the wine should be as sweet as (or sweeter than) the dessert to avoid it being overshadowed. But rules are made to be broken and Cap Classique niftily dodges the numbing effect of ice-cream has on the mouth – choose an example which has good richness and depth of flavour rather than something too lean and fresh.