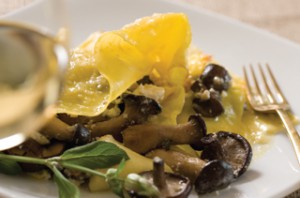 Hallucinogenic attributes and aphrodisiac properties aside, mushrooms have a proud and ancient history. Egyptian Pharaohs feasted on them, early Greeks believed they were food for the gods, and in Rome they were reserved for the table of Caesar and his VIP cronies.

In European haute cuisine, wild, cep, morel and girolle mushrooms were the talk of the town. Limited cultivation satisfied the snooty needs of 18th century Paris, and the first sterilised mushroom spawn was produced at the end of the following century.

But it was not until the 1930s that commercial cultivation kicked off in Europe, introducing mushrooms to a wider audience. The southern tip of Africa got its mushroom-farming act together some 20 years later.

But while cling-filmed punnets of a variety of mushrooms are readily available for a fungi-focused meal, field mushrooms are still top choice amongst aficionados (those who know their ceps from their amanita phalloides and can tell the non-deadly apart from the deadly), who snoop around in the undergrowth in the cooler months when their quarry pops up under the trees.

This has a little to do with rain and sun in the correct proportions and a lot to do with possessing sturdy walking shoes, loads of patience and a suitable probing stick.

Button mushrooms are small and closed. As they grow, brownish-pink gills open. Large, flat, black mushrooms are fully ripe and have darker gills.

Rarer types include oyster, cep, morel, girolle and king mushrooms. Firm shiitake mushrooms (originally from Japan and Korea) have brownish tops with a creamy underside and a luxurious meaty flavour.

250g mixed mushrooms of your choice, wiped and sliced or whole, depending on size

Heat the oven to 200⁰C. Generously butter four baking dishes or one larger dish that will fit the lasagne parcels in one layer. Cook the lasagne sheets in a saucepan of salted boiling water for about 10 minutes until they’re done. Drain on a tea towel and pat dry.

Heat the butter and olive oil in a large frying pan. When the butter starts to sizzle, add the garlic and mushrooms. Stir-fry over medium heat for about two minutes until they soften. Add the sage, and season with salt and pepper.

Cook for a minute or two more, then remove the pan from the heat and cool the mushrooms to room temperature. Mix in the ricotta cheese.

Lay four lasagne sheets in the baking dishes. Spoon the mushrooms on top and cover with the remaining lasagne sheets. Crunch them a bit for visual appeal. Pour over the cream and sprinkle with parmesan cheese. (The dishes can be covered and refrigerated for up to a day before being baked.)

Bake for about 10 minutes until everything is piping hot and the parmesan is golden; you might need to switch on the oven grill for the last few minutes to toast the cheese a bit. Serve with a simple green salad.

WINE PAIRING
Rich and comforting, the forest-floor flavours of this dish go well with a wooded Chenin Blanc with good palate weight.

This recipe was originally developed by the late Lannice Snyman, one of South Africa’s most experienced and well-respected food personalities.