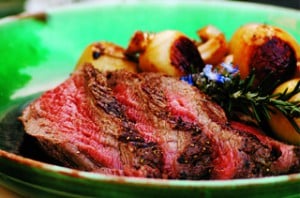 Generally speaking, women cook because they have to; men because they want to – they like to eat, are seldom on diet and couldn’t care less about a seating plan. Recipes are merely for inspiration with measurements in dashes, splashes and fistfuls. A man fries because it’s easier than grilling, does it in butter because it looks, smells and tastes better, and lights up the braai at the drop of a hat.

None of which should excuse botching a decent piece of fillet, so here’s how to get it right. Be very, very fussy when selecting your meat. Besides sport and the state of the nation, “grainfed” versus “free-range” is the debate of the moment. Trawl the internet for mind-altering claims and counter-claims as to what’s best for you, the beasts, the environment and the universe.

According to the South African Feedlot Association, grainfed meat accounts for most of our beef and the faster growth rate results in more tender meat. Proponents of free-range beef, however, say animals that roam freely and graze on natural vegetation are healthier and produce tastier steaks, and also that they are free of hormones and don’t need routine antibiotics. Whatever your choice, make sure your steak is well aged. Then cook it to perfection, serve it with great red wine and your reputation as a meneer of a braaier is assured.

Fillet is perfect when tastes vary. The plump mid-section remains rare; thinner ends are better done for those who prefer less blood. Fillet can be cooked on a charcoal grill or a ridged steel pan in exactly the same way.

Trim the meat, place in a roaster and season with plenty of crushed pepper. Drizzle over a goodly amount of olive oil and roll the meat around in the peppery oil while patting it fondly. Set it aside in a cool spot for at least an hour, turning it once or twice as you wait for your coals to be ready for action – they must be very, very hot.

Push the pointy ends of the fillet towards each other to plump up the steak more evenly, place it on the grid over the coals and keep rolling for about eight minutes until it’s brown and crusty all over. Dribble over the remaining oil and pepper each time you turn the meat. By now the coals will have settled and cooled a bit; knock them down if necessary. Continue cooking the steak – rolling infrequently – until done to your liking; about 20 minutes for rare meat.

Lift the fillet onto a warm plate, tent loosely with foil and rest for about 10 minutes before carving. If you’re partial to a little something on the side, serve with Mustard Seed Onions, which can be prepared up to a day ahead and reheated just before serving.

Combine the butter, mustard seeds and sugar in a medium saucepan. Heat gently, stirring, until the sugar dissolves. Add the onions then the wine, stock, mustard and bay leaf. Season with salt and pepper. Cover and simmer for about five minutes until the onions are tender. Lift them into a bowl with a slotted spoon. Boil the sauce uncovered until it has reduced and thickened. Pour over the onions and serve warm.