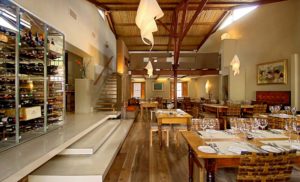 Being in Aubergine is a bit like being in Business Class. It doesn’t feel like anyone’s paying for it themselves. In my experience, you’re in Business Class because the company is paying, because you had enough frequent flyer miles to upgrade, or because you got a good deal with the foreign exchange rate.

So it is at Aubergine – or, as it’s called on the menu, “the Aubergine”.

Looking around I saw a local man entertaining business clients (he wasn’t Cape Town local; we overheard him saying he “flies down twice a month”). There was an American family behind us who barely spoke: three pubescents in well-ironed shirts ranked against the sofa seat, a chubby mum and a father who got up from the table several times to demonstrate his enormous height and give his family members the chance to chatter genially amongst themselves. Silence befell the table every time he returned. If he’d instructed his brood to keep schtum in the restaurant, I can understand why. Aubergine is not a place that invites laughter, or even much conversation. It’s like Business Class in that way too. Here, the carpets, the diaphanous drapes over the windows, the softly-spoken staff, the lack of background music and above all the tables placed too close together encourage a churchgoer’s reverence for chef Harald Bresselschmidt and his plated creations.

Bresselschmidt has been producing fine food in these premises for more than a decade and a half. With his Michelin pedigree, he has been in numerous Top Tens and Readers’ Favourites lists. He is lauded for his ability to fuse Eastern and Western cuisine using local ingredients. As I said to my brother, “it’s kind of a triple whammy. Being ace at Western cooking is one thing. Being able to do Western and Eastern properly is something else. Using local ingredients like springbok and ostrich is genius.”

Bresselschmidt is famous for his wine list; for his attitude to wine in general. He not only supports small producers, especially those who display “creativity” – a word used several times by Manager Paul and Bresselschmidt himself when we were there – Chef is personally involved in mixing the Aubergine house blends.

And when it came to wine, my brother and I were not disappointed. Manager Paul recommended La Complicité, an impossible-to-buy local Colombar, to go with our aubergine soufflé starter, the restaurant’s signature dish. The wine was intensely special, like a Sauvignon Blanc on steroids, all fruit, grass and citrusy zing. Paul’s promise was that the Colombar, with its natural acidic character, would not be overpowered by the marinated goats’ cheese centre of the soufflé – but nor would the wine overpower the delicate taste of the soufflé itself. He was right.

We had reds with our main courses. Brother Rob had John Spicer’s Special Release Tamboerskloof Shiraz to go with his lamb in pastry; I had the Walker Bay 2013 Creation Syrah-Grenache, a glass Paul felt would complement my seafood main.

As for the food, I don’t know where to begin. Despite the plaudits, despite the showcasing of local ingredients, our food was generally ordinary, and in the case of my main course, downright awful.

What was ordinary? A pasta for the duck leg ravioli was tough. The olive bread tasted a day old; the sesame rolls were dense. The pastry encasing the lamb was wet — and strangely dark. The chocolate fondant dessert plate was fussy: cake plus centre plus coulis plus orange plus cherries plus nougat ice cream coated in white chocolate plus praline plus edible flowers. It must be said though, the lamb saddle itself was heavenly and so was the accompanying candy beetroot. The plating of the lamb was beautiful. The texture of the aubergine soufflé was impressive.

What was awful? My “Cape Sea Harvest” main, featuring monkfish, was a fright. The dish was described as “line fish set on a ragout of broad beans and artichokes with crayfish bisque, spinach and grilled octopus”. The line fish was monk. I know a bit about monkfish. I know it recently made it onto SASSI’s green list, and I know SASSI is delighted. Monkfish is a luxury protein if ever there was one – a cheffy green alternative to orange-listed prawns, kingklip and Cape salmon. It’s known as “poor man’s crayfish”, but if you buy monkfish in the UK it will cost you almost as much as lobster. I’ve cooked it at home in the oven wrapped in Parma ham or bacon. Monk is rich and sweet prepared this way. It’s also impressive on the plate, with its tail so similar in colour, texture and girth to a crayfish tail. I was eager to see what Bresselschmidt would do with local monk tail – and as eager as a little girl at Christmas to see the plating.

What arrived was light green slop in a bowl with two chunks – not a single tail; two chunks! – of tail dumped on top. Crowning the chunks were some leaves of wilted spinach like a flat hat caught in the rain. The octopus was like takkie rubber: literally unchewable. The monkfish was watery and tasteless. It didn’t even hold together. It wasn’t sweet, it wasn’t rich. The ragout was gloopy, like a confused pasta sauce.

I told Manager Paul that I was disappointed. He told Chef Bresselschmidt, who came to our table to tell me he agreed the fish was disappointing. We had a chat about wine. Paul gave us complementary dessert wines – for me the Pineau de Laborie, a unique potstill fortified Pinotage, and for my brother the Adoro Natural Sweet Mourvèdre. They were lovely.

On Friday night, the third meeting in four years of the Single Bottle Club as founded by Grant Dodd, CEO of Haskell Vineyards with some input from me as to...