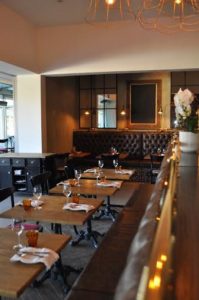 South African eating establishments often call themselves bistros but very few fit with the original French definition of the word. According to American food writer Daniel Young, author of The Bistros, Brasseries and Wine Bars of Paris, a bistro must have a recognisable neighbourhood, stylish yet casual feel, a focus on wine not beer, a chef-patron led menu which changes seasonally and has a foundation in classic French flavours. Michel Mourand’s recently opened Bistro Michel in Athol Oaklands fits Young’s description.

Patrons may initially imagine that Bistro Michel is grander and more “special occasion” than it actually is because Mourand previously owned Gauteng’s ultimate palace of posh nosh, Auberge Michel. Bistro Michel really is what it says on the label – it is lovely but neither the menu contents nor the prices are lavish or extravagant. The most expensive main course on the menu is R160 and every starter (except for the foie gras) is under R70.

Understated, simple style is everywhere apparent. There are leather banquettes and plain wooden tables. One wall is papered with a monochrome map of the Paris Metro (which highlights key food markets around the city) and there are Belle Epoque-style  tiled borders to some of the skirting boards but, for all the French flair, Bistro Michel has a recognisably Johannesburg, Northern suburbs feel. For one thing it is in a shopping centre – a boutique shopping centre, full of designer clothes, classy kitchenware companies and a well-stocked Woolworths – but a shopping centre none the less. With the notable exception of Parkhurst, crime and grime have largely done for old-style commercial streets where eating establishments spill out onto the pavements. Malls provide security and ample parking. For better or worse they are Johannesburg’s new neighbourhood collection and connection points.

It is a local bistro but what locals they are. The venue is within easy reach of all the city’s smartest suburbs. Mourand and Sithole have always managed to magnificently read the mood of the city’s post-apartheid political and business elite and all their old customers are delighted to have them back. I had lunch on a weekday, five days after the bistro had opened and it was already glamorously garnished with tycoons and society belles. All the waiters have worked with Mourand and Sithole before. They discretely recognised and welcomed a constant stream of rich and famous diners. Old preferences and foibles were remembered and attended to. It was like an supersized Franco-African episode of Cheers – where everybody knows your name and they’re always glad you came.

The one page wine list provides no description beyond estate name and varietal. Approximately a third of the offerings are French. Almost all have reasonable-low mark ups. All the sparkling wines are Champagnes and there are a sprinkling of special-treat, blow-the-budget white Burgundies – notably the Henri Boillot Mersault 2012. The phrase “easy drinking” tends to have negative connotations but I mean no disrespect when I say that it is predominantly an easy-drinking list of broad spectrum whites and reds most of which will be pleasant with almost anything on the menu. Many are lighter, have-a-glass-and-go-back-to-work-type offerings to be enjoyed with food rather than pontificated over. Technically, there is no wine by the glass but there are 250ml-, 500ml- and 1-litre carafes. The wine glasses are of good quality so as not to interfere with the tactile experience. Curiously, the espresso machine decided to begin an uninterruptable self-clean cycle during at 1pm so I can’t comment on the coffee but the Yswara Luxury African tea range was available and impressive.

In a city which plays fast and loose with classic culinary terms it was a delight to be presented with a menu that uses classic French food terms correctly. What arrived on my plate consistently matched that which was written on the menu. My companion ordered skate wing with sauce Bercy and that is what he got.

This is not to say that Mourand and his kitchen brigade are mindlessly churning out Larousse Gastronomique by rote. The chef consistently avoids the obvious – snails are sautéed in Ricard not drowned in garlic butter. Almost everything on offer is simultaneously classic French and recognisably influenced by Mourand. Skill is everywhere. Flavours and recipes are simple only in that there are no extraneous flavours.

Picasso once said that “inspiration exists but that it has to find you working”. At Bistro Michel inspiration, hard work and technique are linked. There is understated skill and hard work in every bite. My steak tartare main course was made with lower part of the top side and not the easier to cut and clean but less flavoursome fillet served elsewhere. The sole had been classically (and painstakingly) deboned. The lobes in the exquisitely silken foie gras terrine were perfectly cleaned and yet not broken. Spicing had a hint of cinnamon to aromatically offset the velvety texture and creamy taste. The terrine had a depth of flavour that only comes with having been set aside to age for at least a week. So rounded off and finished in itself was the terrine that it needed no accompaniments beyond a few slivers of brioche toast. The apple tart was accentuated by a hint of almond between the pâte sucrée and the crisp, honeyed apple slices.

The menu at Bistro Michel is broadly French but there is a recognition of and respect for core South African flavour references. The vegetable selection is a triumph of cross-cultural comfort cuisine. Mourand recognises that emotional taste triggers are culturally specific and that Johannesburg is a city where some of us grew up with our mummies making umphokoqo mealie meal with spinach, some with cauliflower cheese and others with cinnamon-sprinkled pumpkin. All of the above are available as gratinated side dishes at Bistro Michel. Portion sizing is definitely more South African than French. I am the greediest girl I know and I struggled to finish my superb steak tartar. Although it must be said, that had I been less enraptured with the cracklingly crisp baguette in the bread basket I might not have felt quite so full.

In recent years, many chefs have served multiple small portions requiring diners to be an audience for a carefully curated piece of culinary performance art. There is a time and place for the chef as entertainer but many such meals have become intrusively over-thought and under-tasted. Bistro Michel serves generous, instantly identifiable and enjoyable starters, mains and desserts. As Mourand observed “I want one plate of food in front of me so that I can talk to my friend. I don’t want waiters forever interrupting with an explanation of what and how I must eat. It must speak for itself.” And so it did. Everything was unpretentiously delicious and encouraged a share-share, stretch across the table, try a bite informality – although it has to be said that when I did just that I encountered ergonomic issues in that the tables are small and the plates are very large. There isn’t really room to move things around.

Great food. Great wine. Great service. Great people watching potential. Giant plates, tiny tables and the temperamental espresso machine aside, Bistro Michel is a delightful addition to the neighbourhood. Even if it’s not your local, it would be worth taking a drive.