The Cellars-Hohenort Hotel shares an atmosphere with The Imperial Hotel in Delhi, India. A lush, 250-year-old garden surrounds imposing, colonial-era buildings. At tea-time on a Sunday the air is tranquil, punctuated only by the sounds of water features, clinking teaspoons and shoes on plush carpet.

Like The Imperial Hotel, Cellars-Hohenhort is exclusive and expensive. 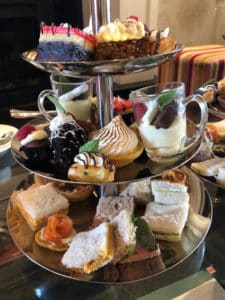 “Awkward” as an idea and in reality.

The high tea cakes and sandwiches are not served buffet-style. Instead, everyone gets their own three-tier stand. In addition to the stand, one is served a plate of cheeses, dips and meats and sosaties.

The range of teas is large, well-chosen and well-described.

In Cape Town’s ideological context, the very idea of high tea is awkward. The reality is no less so. My thought was: the cakes had better be worth it.

Sadly, the eats are – as an actual colonial-era Brit might say – “nothing to write home about”.

The walnut carrot cake is dense and over-spiced. The chocolate eclairs are miniscule – the actual size of young shrimps – and not chocolatey at all. The pecan pie, advertised as a pecan “wedge”, was too big and too sugary – although the garnish of a dot of cream, a half raspberry and a single mint leaf worked well to offset the treacly filling.

The “key lime pie” – indistinguishable from a lemon meringue pie – was also too large, with a pastry base that was not strong enough to contain the runny curd and too-high meringue. Speaking of meringues, the mini pavlova was teeny but good.

What else was good?

The cucumber sandwich was the star of the show: Thin slices of vegetable between slices of white bread with dill cream cheese and – here’s the good bit – a touch of wasabi.

In runner-up position was the ugly duckling of the stand: an unattractive, layered cube of – what? One had no idea. It was not listed on the menu. Only the curious and/or greedy would have ventured to eat it, but what a delight it was: the base was crumbly, there was a dark, dense, cakey section, a custardy bit and the topping had a jelly-ish texture. A cake-cum-trifle!

The “classic Madagascan chocolate cake” was good too. It had all the rich taste of a brownie, with the comforting texture of a rich sponge. It was not over-iced – always a recommendation in my book.

The Cellars-Hohenort tea stand errs on the side of excess – not in variety, but in portion size. It would be ideal if all the cakes and sandwiches were a single mouthful.

The cheese, meats, dips, crisps and sosaties served alongside the stand are wholly unnecessary. Are they provided to appease Banters? Surely not. Banters forewent high tea when they gave up carbs. Are the proteins for men who consider mini cakes and sandwiches girly? For goodness sake, if you aren’t charmed to the point of shrieking by a selection of dolly-sized sweets and savouries, don’t order the high tea. Chaps: the tea menu, I notice, includes a selection of club sandwiches.

Whatever the reason for the additional plates, they hike up the cost of an already pricey tea, and overface the guest.

The little flavoured cupcakes were ordinary. Again, I loved the raspberry garnish, this time on the red velvet cake – usually such an uncompromisingly saccharine confection.

The smoked salmon served on a miniature blini was generous. The “goats cheese and roasted vegetable tart” was confusing: either we weren’t told that the vegetables had been replaced with mushrooms, or the vegetables were browned and dried out in the oven.

The coronation chicken and beef and rocket sandwiches were tasty, but not refined. In look and taste they were more akin to what my friend calls “cricket sandwiches”. Another note: soft, crusts-off bread is the right choice for a teatime “finger” sandwich, but perhaps the quality of the bread should rise above supermarket-sliced?

A note on seating: we were placed in a roomy lounge area, with giant couches. It meant the distances between us were so vast we were unable to converse as a group. There was not enough table room. Also, we were in a position to watch hotel residents having their high teas on the terrace, on chairs, at tables. Like the British class system itself, our seating arrangement was baffling.

The service was also, um, curious. We were ignored for a while, then bullied into accepting six entire “Classic High Teas”, since I had originally booked for six. We would have preferred fewer stands, and some teas with a single plate of scones, or a single slice of cake. This is offered on the menu. It was not to be. I left the hotel carrying two classic high teas in foil boxes. The “textures of chocolate” dessert was absent, as were the cheeses, dips, meats and sosaties.

At a cost of R245 per person, Sunday tea at The Cellars-Hohenort is an indulgent experience. The hotel’s architecture and gardens, the décor and tranquility, are a treat. The food and service is not as good as it could be, but the experience is pleasant overall.