Wine drinkers are brunch eaters. Brunch is not a functional meal like breakfast. Brunch is not interested in “flushing” with “fibre” – a queasy pair of words, even for the mildly groggy. Brunch is not quick. It’s not a meal taken standing, with spoon held between damp face and cold bowl.

Brunch is warm, rich and slow. It’s taken sitting down, with company and, if possible, a view. Brunch is not rushed. Brunch is a relief, a comfort, and – ultimately – a triumph of decision-making.

Wine drinkers appreciate brunch more than most. There are two reasons for this. First, wine drinkers welcome time at the table. We like to treat our palates, and we enjoy doing so in company, in pleasing surrounds. Second, wine drinkers sometimes don’t feel up to eating first thing. By the time we do, we may require not just coffee and eggs, but also a buttery sauce and a buttery pastry.

Brunch is sometimes associated with log fires, sofas and rugs. This is a very English fantasy of brunch, one that involves a faint smell of kippers and the distant sound of a minor noble shouting at his dogs.

But consider brunch with an open window and the scent of the sea. Salty air and twinkly ocean are an excellent antidote to the wine lover’s invisible but potentially calamitous unsteadiness in the morning.

Kalk Bay is the perfect place for just such a breezy meal. It’s by the sea. It was recently voted one of Forbes Magazine’s 12 coolest suburbs in the world. And here, a piece of very good news: The best brunch spots in Kalk Bay bookend each other at the outer limits of the restaurant strip. There’s the stalwart Olympia Café at the Fish Hoek end, with Salt alongside. Newcomer Dalebrook Café is at the Muizenberg end. So, no dodging surfboards or dog leads before coffee.

The Olympia Café opened in November 1997 and has been an institution ever since. Its influence is evident in almost every café along Main Road: Salt, Lekker, Ohana, Sirocco, Bob’s Bagels, Expresso, Bootlegger and Courtyard Café all serve good coffee, good baked goods and foodie breakfasts in spaces that are variations on the Olympia’s boho décor scheme.

For a period, there was little to challenge The Olympia’s gastronomic dominance. The Annex introduced the anchovy breakfast and a benedict served on vegetable rosti – but it lacked confidence. C’est la Vie offered artisanal French bread – but the quality of the croissants was variable.

At The Olympia the chippolatas were consistently juicy; the scrambled eggs were consistently creamy. The ciabatta was superb, the coffee was good. British celebrity chef Rick Stein visited. The Olympia was featured in the New York Times and Vogue Entertaining. On the whole, a grand experience was guaranteed: warm staff, excellent views and the prestige that came with being in-the-know.

Famously, the Olympia does not take bookings. Often on weekday mornings the place is swarming with visiting Scandinavian families and clacky-shoed, obscenely short-trousered cyclists. You’d think the next-door restaurant would thrive on overruns.

On the contrary: Home of Waffles and Pancakes struggled and failed. Michael Townsend’s La Parada was good-looking and buzzy, but it succumbed. Nick Macloed’s Salt, opened in 2017, became the first establishment in 20 years to co-exist with The Olympia Café as a restaurant of choice, not a second-best.

Salt is vegetarian- and vegan-friendly. The shakshuka is one of the only spicy brunches available in the South Peninsula and the vegan almond croissant may be the best in the country. Plus, Macloed had the canny idea to sell coffee for R10 before 9am. This has created a base of local support. On weekday mornings, Salt is almost exclusively occupied by Kalk Bay residents with their yoga mats, laptops and wet towels.

And this year, thrillingly, Dalebrook Café has hopped into the ring with The Olympia to take it on at its own game. 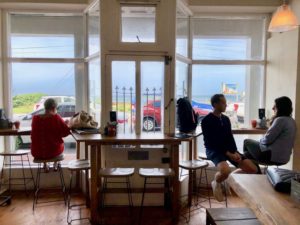 The owners of both Olympia Café and Dalebrook Café have proper foodie cred. Olympia owner Kenneth McClarty co-founded his café with two acclaimed chefs, both of whom contributed significantly to the menu before leaving to open their own restaurants. Coincidentally, Dalebrook Café owner Charmaine Lilje had her first restaurant job at The Olympia. She went on to work under Franck Dangereux at La Colombe, even acting as head chef for eight months before Luke Dale-Roberts took over from her.

Dalebrook Café is an ambitious project. There are café tables, long tables and numerous bar counters over four different areas, including a large outside courtyard. The Café makes and sells six different loaves, including a 100% rye and a sourdough. The chocolate cake is famously rich. All the bakes are made with stoneground flour, free range eggs and farm butter. Lilje sells readymade meals like lasagnas and the ice creams are homemade. Lilje does all this at her first restaurant, Chardonnay Café, too. With so many irons in the fire, quality control becomes an issue.

Half a year in and Lilje has her head above water. She won over the swimmers and yoga practitioners almost immediately, offering take-away coffees, Kalk Bay’s first energy bowl breakfast – with almond butter, oats, dates, coconut milk, apple and banana – and a generous avocado smash with salmon and poached eggs. She even installed lockers for towels and cellphones.

The décor is not exactly what we’re used to – it’s a little bit Melissa’s / Tasha’s – but the crisp, feminine styling has proved refreshing. At places like Ohana – and some have said at The Olympia itself – shabby chic can stray into grubby.

The core menu at Dalebrook Café is good, but there is room for development. Despite the offer of oysters for breakfast, one feels the influence of both The Olympia Café and Dangereux’s Deli in Noordhoek.

There is something about the homemade peach sorbet at Dalebrook Café that suggests a culinary direction for Lilje. It’s the combination of delicacy – the ripe fruitiness, the hint of rose and the overall skill – the decadent richness of the sorbet – that echoes Lilje’s gentle nature and her strong work ethic.

If brunch this Sunday is less about mopping up the previous night’s damage and more about celebrating Mothers Day – it may be an idea to swop the clamour at the Olympia for a quiet outside table at Dalebrook.

Your other Kalk Bay brunch options are:

Bob’s Bagels
There’s nothing wrong with the food and drink. The bagels are handmade, locally, in small batches. The coffee is roasted in-house. It’s just that the kitchen is tiny, resulting in a tiny menu. If it’s a multi-course brunch with sauces that’s required, you won’t get it here. Nonetheless, it’s glorious to sit in the sheltered park with a genius flat white and a fresh-as-spring cream cheese bagel. This is the ideal brunch with young children. 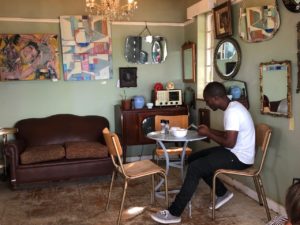 Ohana
The Vegan Love breakfast with sautéed mushrooms, nutty humus, wilted spinach, sweet tomato relish and toast is excellent. The cold-pressed juices are equally good. Ohana gets high marks for its plant-led menu – and its location on the water – but don’t put your head in the kitchen if you’re a neat freak.