Running any restaurant is very, very hard. Restarting an iconic eating establishment in a new location (especially one that was not previously used as a hospitality venue) is even more difficult. Criticising when said restaurant is less than perfect is a much easier exercise. Almost any fool can identify faults but it takes great skill, perseverance and energy to sort them out. What follows is intended as constructive criticism. I hope it reads that way.

La Colombe was previously based at Constantia Uitsig and recently relocated to the Silvermist organic wine estate at the top of Constantia Nek. The restaurant’s name has brand value and it is understandable that the owners would want to keep it but maybe this was a mistake. There is a tiny ‘at Silvermist’ under the restaurant’s name on all their printed material but it is so small that only the eagle eyed will spot it – for all intents and purposes the public are expecting La Colombe as it once was. The new space is inevitably going to invite comparison and yet it is so different. The white-painted timber structure with charcoal finishes is reminiscent of a Cape Cod beach house. It is handsome, soothing and expansive but it makes for a completely different ambiance to the intimate Cape Dutch gravitas of the previous incarnation. Despite maintaining most of the staff and several (slightly modified) signature dishes, eating at the new La Colombe doesn’t feel like a continuance. It feels like a new restaurant. One still finding its feet. One with quite a few wobbles.

First, there are construction issues. At its most basic, the plumbing was a problem on the day of my visit. Lavatories smelt unpleasant and at one stage the loo floor flooded. Service is also struggling to find a rhythm. My friends and I arrived in the foyer to find a ringing telephone but no receptionist. We were not hovering alone in the entrance hall. Two other parties had arrived before us and a third followed us in. My fabulous friend is very cheeky so, after waiting a while, she answered the phone and took a message. She took two bookings and a cancellation before anyone actually employed by the restaurant noticed that we were there.

Subsequent table service was slow – a hungry diner might expire waiting for the bread to arrive. When menus finally came most of the contents did not excite. Offerings such as the seared scallops and pork belly starter have followed the team from the previous venue. Signature dishes are one thing but even the novel listings seemed calcified and derivative. Miso glazed kingklip has potentially unfortunate eco-epicurean implications and could be considered overly reminiscent of Nobu. The fillet of beef with spinach and fondant potato was more suited to a competent final year chef student playing it safe in an exam than a real restaurant with aspirations to greatness.

Many of the starters and mains felt like there was too much happening on the plates. Tastes didn’t harmonise and several of the flavours promised on the menu were seemingly absent. Daikon kimchi utterly overwhelmed the lemongrass and ginger velouté served with the scallop and pork dish. Speaking of veloutés there were a lot of them (I counted three on a printed bill of fare with only four-listed main courses and another amongst the specials) which felt like unbalanced menu planning. The waiter said that the salmon’s asparagus velouté would be ‘lightly truffled’ but truffles are inherently assertive and they were. Everything was under-seasoned but rather under than over.

Plating was fussy and distracting in a manner that felt like a lack of confidence in actual flavours. The ‘tinned’ yellow fin tuna with ponzu and ginger literally came in a tin with a ring pull to open which was clever but not clever enough to hide the lack of flavour. All this sounds unkind but at these prices (the cheapest starter on the menu is R130, the most expensive R215) an open-eyed assessment is appropriate.

Open-eyes must see both strengths and weaknesses and mine did. For all that was wrong with my meal there were moments of great beauty, skill and deliciousness. The foie gras with caramelised brioche was a sublimely smooth pleasure – although curiously the menu bills it as ‘terrine’ and mine was unmodified (albeit wonderful) liver. The Diners Club Award of Excellence winning wine list is still a well-chosen melange of local and international offerings with a good, value-orientated wine by the carafe selection. The well informed and charming sommelier Joseph Dhafana was the service star of the day. 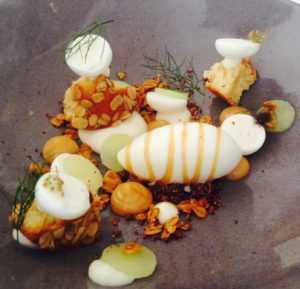 Pastry chef Glen Williams also deserves a special mention. His work was technically very high skill without ever descending into showing off. His flavour combinations were innovative, exciting and assured without ever feeling tricky. Generous in conception, the desserts were surprisingly reasonable in price relative to the mains and starters. I adored the fennel seed financier with buttermilk sorbet and honey meringue. Every taste promised on the menu shone out of what came to the table. Every new flavour added to its companion tastes. The bitter chocolate namelaka cream was a deep, intense, almost savoury pleasure. The pickled sultanas on the cheese board were at once sophisticated and appealingly of the terroir. The beetroot liquorice was sublime in its force of flavour. The carrot and ginger pâte de fruits was masterful. Is it still ‘de fruit’ when it’s made with a carrot or should that be pâte de legumes? Either way these handmade, posh-nosh wine gums were the best example of the form that I have ever tasted. For the record, the white peach versions served at Waterkloof come a close second.

I often struggle with the sweetness of dessert so I asked for my coffee to accompany this course. The espresso arrived a full ten minutes after the puddings were cleared but I didn’t care. Everything that came out of La Colombe’s pastry department was worthy of single focus and didn’t need to be moderated or washed down with coffee.

My recommendation would be to go for an à la carte ‘lunch’. Skip mains, order all four offerings on the dessert menu and a very good bottle of wine. Sip slowly and bask in the beautiful balcony views. Even if you think you are ‘not a dessert person’ the subtle artistry of taste, texture and technique is a joy. The rest of the restaurant is not great yet but the other members of the team (who have shown themselves to be highly skilled in the past) and the plumbing will probably catch up soon.

Cape Town restaurant La Colombe has been named the 13th Best Fine Dining Restaurant in the World (and the Best Restaurant in Africa) in this year's Tripadvisor Traveller's Choice Best...