Cameron Ewart-Smith: Out and about in Paarl

Finding real adventure in the winelands with offspring in tow can be tricky unless you’re flexible enough to leave your travels up to chance.

“Why is it there,” asked my son Alex, aged 10. “Why is what there?” I asked glancing across at my passenger seat. He pointed to Paarl Rock out the window. We were meandering down the N1 out of Cape Town – looking for something to do together in the winelands. That in itself should be easy – but for some or other reason as a single father (for the day) all the stuff I read online left me feeling a little uninspired. An unfortunate number of ‘the-ten-great-things-to-do-with-kids-in-the-winelands’ stories I found boiled down to a generic list of farms that have a patch of grass and a jungle gym so that mum can catch up with her caffeine intake – usually in the company of another such beast. That or the slightly risqué children’s grape juice tastings… which frankly seems a wee bit dodgy.  Nope, I wanted something real – something we could do… mano et mano. And maybe Alex had just put his finger on it.

Paarl rock is a large granite intrusion that seems to mushroom out of the vineyards surrounding Paarl – about 40 minutes from the centre of Cape Town. The last time I was on the rock, I was 20-odd and climbing the granite surfaces like a gecko. As we got closer it struck me that I certainly wasn’t a gecko any longer (keep those hippo comments to yourself). And the rock looked more intimidating than ever. That and the fact that my physio has been badgering me to see a specialist for a torn muscle  suggested this wasn’t necessarily going to be the return of the great explorer. 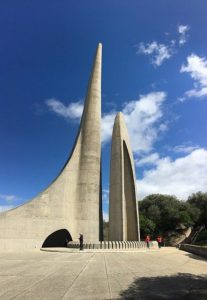 On the way up we encountered the Afrikaans Taal Monument and pulled in to visit (entry fee is R30 for adults, R5 for kids). After walking around the concrete edifice trying to answer Alex’s questions about why Afrikaans, are there monuments to the other languages and so on I beat a hasty retreat. Ultimately, it’s just one a hell of a monument – beautiful in its own way even but after five minutes you’ve kinda seen all there is to see.

From the Monument we took the ominously sign posted Jan Phillips Memorial Road which, and I quote, “does not conform to modern road design/safety standards.’ Ha I thought, finally some adventure. But the road is pretty tame (although if it was pouring you might think twice about venturing up there in a sedan car). The dirt road traverses the base of the great granite dome before delivering you to the Paarl Mountain Nature Reserve. From here a number of trails lead up to the rocks and across the mountain slope. 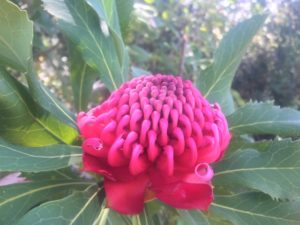 A protea in the Paarl Mountain Nature Reserve.

The reserve is also home to an indigenous flower garden which was a complete surprise – and it’s a real find. Unlike my recent experiences of Kirstenbosch National Botanical Gardens, we practically had this place to ourselves. Quiet trails weave through green beds of ferns, forests of indigenous trees and pink swathes of ericas dotted with vibrant proteas including a red variant I’d never seen before; these two flower types contribute enormously to the incredible biodiversity of the Cape. Sure, it wasn’t quite adrenaline-rush adventure I’d hoped for but by the time we’d explored the flowers brimming with bees and insects, discussed the vagaries of pollination and played Pooh sticks in the small mountain streams that gurgle through the garden, we’d worked up an appetite. With Alex complaining we’d forgot about elevinsies (he is part hobbit) we headed for lunch. 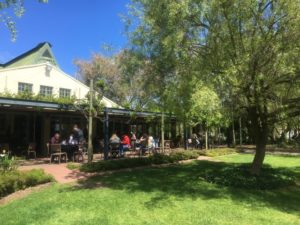 I’d read that the Joostenburg Bistro is an ideal place for lunch with kids and I can see why. Enormous lawns, jungle gyms … oversized dugout canoes marooned in a sea of grass. But the weather was being its capricious self, so we stationed ourselves inside by the fire. My son has recently discovered fine dining (courtesy of Grande Provence in Franschhoek) so he scoffed at the kiddie’s menu provided and went ahead ordering himself the linefish accompanied by a dark chocolate milk shake (I’m to believe this is a very popular pairing with pre-teens). I ordered the steak and a glass of organic Joostenburg Chenin Blanc 2017.

The Bistro attracts an eclectic crowd of elderly couples enjoying a coffee, young families of harassed parents complete with babies in tow… a striking blonde sipping coffee alone in the corner keeping her iphone company and guys poring over their laptops as they try to fathom their next million … oh and of course middle-aged dads and their kids.

And here Joostenburg certainly delivers – it’s the kind of place you just inherently feel comfortable in whatever your walk of life. And yet I was left a little disappointed by the food. Don’t get me wrong it’s not that it wasn’t yum it just wasn’t yum! yum! – if you get my meaning. Don’t let that put you off though the experience, service and welcome all far outweigh the slight negative. There is a wonderful deli, and nearby the Stellies Taproom Brewery has opened its doors offering its range of craft beers. If the weather’s good then visit Acrobranch, which operates courses and ziplines in a copse of large gum trees on the property.

Unfortunately, the weather was chilly enough to make real outdoor adventuring pretty unpleasant, so we turned for stables and headed for Cape Town. Oh, I almost forgot why’s Paarl Rock there? I don’t actually know but, next time, we will have to climb it because it is.

One morning last week, I thought: "Hey I’m going to taste the best wine in South Africa: … as one does. What seemed like an immediately obvious thing to google, however,...

Despite considerable personal evidence to the contrary, I’ve always thought it strange that people buy wine from convenience stores or worse online from the comfort of their own homes, when...