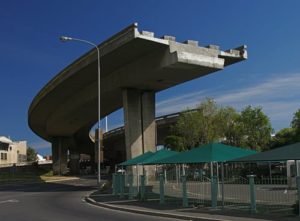 This missive is dedicated to the connection between some curious unfinished flyovers and a glass of wine. Continuing the musical theme from my first missive, this one is to be sung to tune of “Stranger Than Fiction” from the pen and piano of Joe Jackson, one of the most versatile musicians of the past 40 years.

The going-nowhere flyovers that run parallel to the harbour area have become one of Cape Town’s most recognisable engineering follies, beloved of movie makers and the subject of much idle barroom speculation. The most popular urban legend has it that the engineer who designed them got the curve of the cambers wrong on each side so they could not join, and he ended up committing suicide. Which is simply not true.  As with most things, the real story is more complicated and far more interesting.

Those flying flyovers were part of an ill-conceived plan by the city engineers in the 1970s to build a freeway system linking the incoming highways coming into lower downtown with a dual carriageway all the way up to Kloof Nek. To achieve this they would need to buy up all the land between Bree and Buitengracht streets, which they began to do.

The plan started out well enough; the base freeway flyovers were duly built and the land expropriations started off smoothly. Things were going swimmingly until they came to the crumbling block between Shortmarket and Hout streets that had decayed into a kind of warren where various troglodytic people had set up shop. in the murky, slanting clearstory sunlight.

Then two things happened: first property prices started escalating as news of the expropriations spread like a shack fire through town. Then some wise city fathers realised that particular block was rather special. It was an early 18th century group of warehouses and commercial buildings, which included some of the last slave quarters remaining.

Included in the original tenants were tobacconists and snuff makers, gunsmiths, bakers and coach makers. There were retailers, a boarding house, a chapel and even an undertaker. In the 1960s the block was scheduled to be demolished and replaced by a parking garage.

Then in rode Institute of Architects and Van Der Stel historic foundation, which gathered support and set up a task force to protect the block. Today we know it as Heritage Square and it includes several retailers and businesses as well as the Heritage Hotel and popular nightspots such as Bistro Bizerca, Savoy Cabbage and Africa Café.

During the review process the imprudence of the Kloof Nek freeway system was exposed and the plan was shelved, with those flyovers left as a monument – a modernist urban follies if you will – to the plans of engineers and empire builders.

HOW THE SHELVING OF THE PLANS SAVED AN OLD VINE

We know that the first wine was made at the Cape on 2 February 1659 because replenishment station Commander Jan van Riebeeck wrote in his diary: “Today – praise be to heaven – for the very first time the grapes of the Cape were pressed for winemaking,” By all accounts is was pretty medicinal stuff, Van Rieebeeck being a ship’s doctor and the Dutch being not famous then or now for viticulture.

Originally Van Riebeeck had imported cuttings of indeterminate variety from the German Rheingau wine area and later more from Bohemia, the Canary Islands, France, more from Germany, and Spain. Among them were Muscat Blanc à Petits Grains or French Muscadel and Muscat D’Alexandria, also known as Hanepoot (it was really called hane kloot, or hen’s balls, but the name was euphamised by the stiff Dutch Calvinists). It’s thought Van Riebeeck made his first wines from sweet French Muscadel..

The vines of The Company Gardens did not survive very long before wine making moved to the valley Constantia and thereafter Franschhoek, Paarl and Stellenbosch valleys. Nothing remains of the earliest vineyards. However, it was common for people “in town” to plant vines and make some wine in their own gardens.

During restoration of Heritage Square it was found to have the oldest vine in South Africa, still shading the central courtyard and bearing fruit after many decades of neglect. It was planted in 1771 or thereabouts. In 2008 – 237 years later – the hotel had four magnums and twelve 750 ml bottles of wine made and hand bottled on the premises. It was named 1771 and sold on auction and apparently tasted pretty good.

The varietal is Cape Riesling, but it’s not actually a Riesling. It’s really Crouchen Blanc, the same kind that made Paarl and Theuniskraal Rieslings popular quaffers back in the 1970s and ‘80s. Whatever you call it, it is likely the oldest producing vine in the southern hemisphere.

That’s good reason to go and have a glass of wine under that historical vine, and cheers to poor city planning.

So much of what we were taught about him under Apartheid simply wasn’t true. It wasn’t even his face gracing our old paper currency! (The chiselled features and flowing locks...