David Bristow: Of Men and Wine, Noble and Not-so 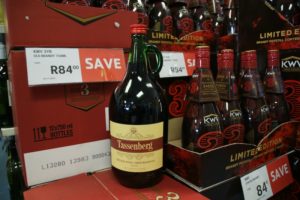 No self-respecting student in the Cape over the past eight decades, since 1936 specifically, would face the year without the character-building help of another colourful local celebrity, Adam Tas – dead for nearly three centuries but the name behind a favourite winelands label.

The year in which Tassenberg, known affectionately as Tassies, was launched by Stellenbosch Farmers Winery as a cheap and cheerful unwooded red wine was auspicious in other ways. It was the year in which the Nazis consolidated their evil power and England’s King Edward VIII abdicated. Jesse Owens won four golds at the Berlin Olympics (where Hitler did not snub him but, later, his own president did). Kris Kristofferson was born and Rudyard Kipling died, among others.

Traditionally made from so-so Cinsaut, with a splash of proudly South African Pinotage, it comes in a bottle, flagon or box. Quaffed by not only students, it is in short southern Africa’s biggest selling wine. WineMag previously pegged Tassies as being “known by all, praised by few”. Absorbing that affront, wandering wine critic for the unpretentious Dave Biggs reckons it is one of the most underrated and underpriced Cape reds.

So where did Tassenberg get its name? In 1911 a librarian (let’s assume bespectacled) at the South African Library located in the old Company Gardens (where, incidentally, the first wine in South Africa was produced two and a half centuries previously) discovered a dusty old manuscript that turned out to be the court record in the trial of Adam Tas, and thus did the legend of Tas begin.

Dutchman Tas had arrived at the Cape in 1697 at the age of 19, where he benefitted through family connections: his aunt was the niece of one of the Heere Sewentien (directors of the Dutch East India Company) and was married to Hening Huising, then owner of Meerlust. Tas’ fortunes rose further when he married Elizabeth van Brakel, a wealthy widow, and became master of several farms in the Stellenbosch district.

Then he got mixed up with the Broederbond (really!) – a group of free burghers who opposed the wanton corruption Governor Willem Adrian van der Stel, son of the popular but also covetous Governor Simon van der Stel. Apart from commandeering all lucrative markets, the Governor used company resources and sold tenders to build a sumptuous country seat at Vergelegen.

Tas and 66 other free burghers drafted a petition against Van der Stel and sent it directly to the VOC directors in Amsterdam. Who did nothing. A governor of a distant settlement was lord of all he surveyed and by and by the bad Governor heard of the petition. Tas was dragged to the Castle in chains, convicted and thrown into the Black Hole.

There he lay for 13 months in that dank dungeon with no light or ventilation. I sometimes take tourists in there and turn off the light; it is seriously creepy. But here Cape history takes an unexpected turn. At this particular time Holland was at war with France (later they became allies). The Cape Winelands were full of Huguenot free burghers, Protestant refugees from Catholic France. The Heere XVII thought some of them might turn spies against the VOC so they freed Tas and gave him another farm to buy his compliance.

Most of the popular literature has Tas returning home to Stellenbosch and, in coining a pun, renaming his farm Libertas (Tas is free). But according to the fine and well-researched work The Old Houses of the Cape authors Hans Fansen and Elizabeth Cook, Tas was already lord of land and manor of adjoining farms already named Libertas and Oude Libertas.

Today Oude Libertas is a flagship property of the Distell wine and spirits consortium, formerly Stellenbosch Farmers Winery, a cultural hub of Stellenbosch. From it comes the name of a second wine to honour honest Adam, Chateau Libertas.

Although closer to Tassies than any vintage languishing in the cellar of a French castle, Chateau Libertas is the wine that has led most South Africans’ lips from bottle top to wine glass. Cabernet led, it has no fixed formula and at various times has been invigorated by just about all the red varietals grown in the Cape.

These wines were the creation of another flamboyant character of the local wine scene, American-born medical doctor William Charles Winshaw. He arrived in the Cape in 1900, in the heat of the Anglo-Boer War, and by and by fell into the local wine industry. In time he started Stellenbosch Farmers Winery and accumulated properties, including Oude Libertas.

He also acquired the historic townhouse La Gratitude in Dorp Street, which gave its name to the eponymous and inauspicious white blend Taskelder La Gratitude. Today the gracious Old Cape building is home to golfing phenomenon Ernie Els’ Big Easy restaurant. And if you were wondering how an American came to be the founder of modern South Africa’s wine industry, you haven’t half figured quite what a swashbuckler was old William Charles Winshaw, so I’ll save that for next time.

When a bottle of Chateau Libertas 2017 proved spectacularly disappointing earlier this year, a colleague urged me to re-visit Tassenberg for a happier experience. This non-vintage, entry-level wine comes with...

As part of my recent effort to give users of this website a baseline when it comes to scoring, a bottle of Distell’s Chateau Libertas Classic Dry Red Blend 2017...

I had intended this week to have a look at sub-R100 foreign white wines. But the weather in Cape Town has turned so autumnal, even wintry, that I then shuddered...