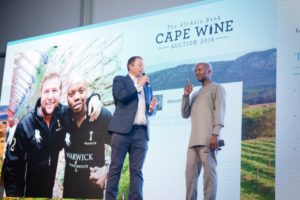 A record was broken when the first ever bottle of Touch Warwick Cabernet Sauvignon 2014 was sold for an R1.3 million – a wine bought out of a collaboration between TBo “Touch” Molefe, MD of Touch Lifestyles Group and Mike Ratcliffe, MD of Warwick Estate. The lot also included a luxury winelands golf tour with Molefe and Ratcliffe in attendance.

The Port2 Fino Lot, sponsored by online wine and spirits retailer Port2Port and including one week for eight guests at Villa Montefino in Portofino, Italy also fetched big money, going for R1.25 million.

Every cent raised, without offset or deductions, is added to the Cape Wine Auction Trust and given directly to charity.

For images from the Friday night barrel auction at Constantia Glen, click here.

Mike Ratcliffe: The Metaverse – a brave new world for the wine industry

Stellenbosch: The mood is electric at the top-end as the wine industry seeks to actively reimagine itself. The notion of South African fine wine, until recently a seldom heard and...