Stellenbosch: The mood is electric at the top-end as the wine industry seeks to actively reimagine itself. The notion of South African fine wine, until recently a seldom heard and oft-scoffed-at concept is pushing forward as a growing number of producers stand together like never before. On the back of a decade-long explosion in quality, the industry is now striving to realign quality with price and shake the too frequently quoted moniker of being the “cheapest producer of high-quality terroir wines in the world”.

On the back of some gains by the former Nederburg Auction (slow) and niche gains by the Cape Winemakers Guild Auction, a new strategy is taking hold. The new energy is seemingly ignited by amongst others, wine guru Michael Fridjhon who together with Simon Tam of Christies Asia created opportunity for a small handful of South Africa’s finest wines at the annual Christies Autumn Wine auction in Hong Kong – culminating in record-breaking results.

A significant and fresh source of innovation has been the emergence of two separate and independent South African focused wine investment funds in 2018. The first is Fine Diamond Wine Investment Holdings, the brain-child of Ken Kinsey-Quick, a former partner at Thames River Capital in London. Fine Diamond launched a global Dollar-based wine fund housed in London, but with a mandate to hold a significant (33%) proportion of South Africa’s most iconic wines. Also in 2018, Roland Peens of Cape Town’s Wine Cellar launched the sold-out Rand-based Vintage Investment Portfolio (VIP) wine fund with a 100% focus on South Africa’s greatest wines from the 2015 vintage. Both funds are successful in raising significant capital answering, to some extent, the question about demand for fine South African wines as an asset class. The question surrounding liquidity and exit will always introduce doubt into any new wine investment fund. How does an investor exit a wine investment profitably without having to use a corkscrew? Who is going to pay the premium at exit? Which platform will host supply and demand forces allowing these wines to be traded? 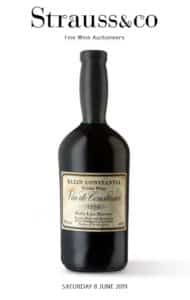 Answers are emerging. Liquidity and the emergence of secondary markets is where things are becoming really interesting. The South African fine wine conversation accelerated aggressively into 2019 with the April announcement by South Africa’s foremost auction house, Strauss & Co, of a joint venture with Wine Cellar and top sommelier Higgo Jacobs to launch a Fine Wine Auction programme. ‘We believe the time is right to elevate South African wines to the same degree of collectability as the visual and decorative arts’ says Strauss & Co Executive Chairperson Frank Kilbourn. The aggressive roll-out commences with the inaugural Johannesburg Auction on 8 June (see here) and a Cape Town Auction on 12 to 14 September 2019.

Significantly, one of South Africa’s leading fine wine events, the Nederburg Auction which was established in 1975, is implementing a dramatic pivot and rebranding as the Cape Fine & Rare Wine Auction in a bid to help drive the premiumisation of South African wines. As well as an appropriate new home in Stellenbosch, a new 18 to 19 October 2019 date and a revamped name, the auction has announced collaboration with globally recognised auctioneer Christie’s to “benefit from their expertise and gravitas in the category and plan to build our presence at global events in a phased approach.” The new auctions are the most important new developments as they seek to create the platforms for buyers and sellers to trade. An active secondary market is critical for the development of a fine wine culture and the industry would be foolhardy not to support these initiatives.

A dramatic amount of change is coming to the top-end of the South African wine market with buy-in by a large proportion of the most important players. Success is going to require flawless execution, fortitude and a thick-skinned determination to deliver, despite what will surely be a small sub-section of naysayers. Plan for success has long been a motto that I have lived by which should surely become a rallying call to the industry. Success will have positive ramifications for the entire wine sector and requires total support. Now, how will a relatively small number of serious wine players be able to supply sufficient volumes of high-quality wines to supply global demand?

Mike Ratcliffe: The Metaverse – a brave new world for the wine industry

Volumes of the Old Bush Vines Chenin Blanc 2016 from Darling Cellars which won the Harold Eedes Trophy for best in class at this year’s Old Mutual Trophy Wine Show...