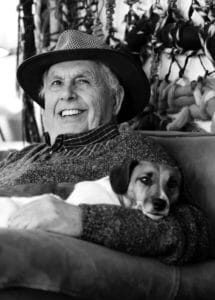 The Sperling family of Delheim in Stellenbosch have announced the passing of Michael Hans ‘Spatz’ Sperling earlier this morning at the age of 87.

Sperling arrived in South Africa as a 20-year-old from Germany in 1951 to join his uncle Hans Hoheisen and aunt Del and over the next 60 years, grew this farm on the Simonsberg into the popular property that it is today. In 1975, he also acquired prime vineyard land on Klapmutskop, which he named Vera Cruz after his wife. Delheim’s flagship, the Cabernet-led Grand Reserve, first produced in 1981 and among the early Bordeaux-style blends, comes from these vineyards.

More generally, Sperling must be considered one of the great pioneers of the South African wine industry. In the days when there were few privately owned farms, Sperling along with Sydney Back of Backsberg and Frans Malan of Simonsig, founded the Cape Estate Wine Producers. Together they were also instrumental in transforming wine estate legislation which led to the 1973 Wine of Origin system. Sperling was also a founder member of the Stellenbosch Wine Route together with Frans Malan, and Neil Joubert of Spier,.

A private funeral service will take place in the Delheim cemetery. A celebration of Sperling’s life will be held at Delheim at a date to be announced.

Delheim has launched its first single-variety Cabernet Franc, named Vaaldraai after the vineyard which supplied the grapes and very nicely judged it is, too. Matured for nine months in 6...

I don’t mind sharing with you that last week was arguably the crappiest of the entire year so far. I’d compare the last couple of days to a papercut. Between...