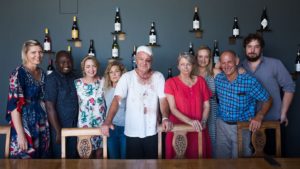 Charles Back and co. – bloodied but unbowed.

Charles Back of Fairview and Spice Route last night endured a brutal farm attack on his farm in Paarl. He was beaten up with a crow bar, receiving severe cuts and broken bones requiring hospitalization. He was discharged this morning and is now recovering at home.

In a statement that originally appeared on the Fairview Facebook page, Back said: “I want it to be known that this attack was not politically divisive in any way, but that these were just three common gangsters motivated by their own self-interests. I believe in the values that this country was built on, and continue to hope for harmony and peace. I am now doubly motivated to come into work every day, and will continue to ensure that I can contribute and try make even the smallest difference in my community.”

Tim James wrote recently about the new Obscura range from Spice Route, the wines made in large terracotta vessels known as qvevri imported from Georgia, spurring me to undertake my...

The visionary undertaking that is the Old Vine Project continues to result in some wonderful wines, the latest to appear on the scene being the Ploegperd 2018 under the avant-garde...