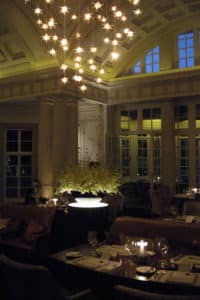 Gone is the cringeworthy mural…

The Cape Colony restaurant at Cape Town’s Mount Nelson hotel was in need not so much of tweaking but a seismic shift into the modern era – the high colonial ambience stopped being ironic and simply became twee a long time ago.

A complete make-over has been completed and the restaurant will now be called Planet in line with the successful bar alongside. Fittings are astronomical in both theme and you imagine price, dramatic starburst chandeliers being particularly eye-catching. Sandro Fabris, regional managing director for Orient-Express which owns the Mount Nelson, says some of the changes he oversaw were difficult for the group to accept. Like what? “Place mats instead of white table cloths.”

Last night, a soft launch of the re-vamped restaurant, the kitchen under chef Rudi Liebenberg, who arrived at the Mount Nelson in mid-2009 after a successful stint at the Saxon hotel in Johannesburg.  The menu we were served  included crayfish and butternut terrine matched with Rustenberg Sauvignon Blanc 2010 as a starter, a combination of lamb loin and braised shoulder on crushed potatoes as a main with Rustenberg Berg John X Merriman 2008 and chocolate soufflé with Waterford Heatherleigh dessert wine.

I won’t pass judgement on the food other than to say it is unadorned with the focus very much on top quality ingredients – if you want culinary theatrics then best to go elsewhere.

As for the wines, I must confess it was the first time I had encountered a Sauvignon Blanc under the Rustenberg label, and I note that the wine is not listed in Platter’s prior to the 2009 vintage. There was always an example of the variety under Rustenberg second-label Brampton, but with this having been sold off, it appears that Sauvignon with its fast turn-around time in terms of production was strategically too important not to include in the Rustenberg range. The 2010 is more than appealing to drink with ripe green melon fruit offset by bright acidity but that it exists at all does dilute the Rustenberg proposition somewhat for me.

The Bordeaux-style John X Merriman 2008 was very fine, as might have been expected but why would you pay the full price of around R150 a bottle for the current vintage when you can get the 2006 (unlabelled) for R99 a bottle from Getwine.co.za? That times are tough in the wine industry is no secret but you’d like to see the Rustenberg brand enjoying just a little more careful stewardship.

The Heatherleigh from Waterford is a sweet wine made according to the solera system and while previous batches have been a little imprecise for me, last night I found it pleasing with concentrated flavour and soft but sufficient acidity.

To stand atop Rustenberg on the slopes of the Simonsberg in Stellenbosch is wondrous. This property has been owned by the Barlow family since 1941 and measures 880ha in total...