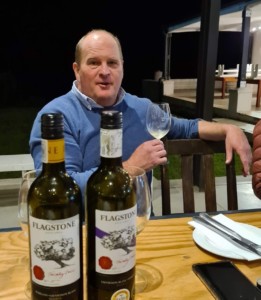 Pratt was a key figure along with neighbours Dirk Human of Black Oystercatcher and Johan de Kock of Zoetendal in establishing vineyards in the area while Jack chose to analyse the ward while studying for a winemaking degree at the University of Adelaidein the mid-1990s.

By 2000, there were extra grapes available from Pratt’s farm and thus The Berrio, named after a ship that led Vasco da Gama’s expeditionary voyage around Cape Agulhas in 1497. The Sauvignon Blanc was just about an instant success, while a Sauvignon Blanc-Semillon blend called Weather Girl added to the range in 2006 quickly became a benchmark for the category.

In 2008, Jack sold his Flagstone business and in that process was required to give up all his joint ventures, including The Berrio. Pratt assumed ownership of the brand and from 2014 to 2019, David Nieuwoudt of Cederberg Private Cellar and long involved in Elim making wines under the Ghost Corner label, was responsible for production.

Unfortunately, the 2020 vintage wasn’t made, but Jack and Pratt have now agreed a new partnership to craft The Berrio – the grapes continuing to come from Pratt’s farm, the wines once again made by Jack and his team, the new vintage set for release in August.

There’s an aphorism which holds that “The older you get, the more like yourself you become” and this applies all too aptly to The Weathergirl 2009 from Elim, a 2:1...

The family tradition on New Year’s Eve is to gather around the table with some decent food and wine. The menu this year: Beetroot and vanilla gravalax and rooibos smoked...

For all the real or perceived shortcomings of Sauvingon Blanc, it works pretty well as an aperitif after a day on the beach. Two highly acclaimed examples recently were the...