10 years ago this month 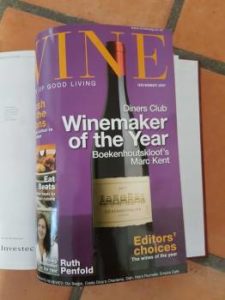 10 years ago, Marc Kent had just won Diners Club Winemaker of the Year for the Boekenhoutskloof Syrah 2005 – this offering from the Franschhoek cellar remains a local benchmark of the variety, the current release 2015 the first time that it is certified as being from the Swartland whereas for a long while it was sourced from a single block on Schalk Welbedacht’s Wellington farm.

The international judge for the Diners Club awards was top Crozes-Hermitage producer Allain Graillot  who declared himself in the December issue of Wine magazine interview as “one of the last dinosaurs to use whole-bunch pressing” – today just about every new-wave producer is choosing to employ this technique to a greater or lesser degree.

Ruth Penfold, meanwhile, was Young Winemaker of the Year for the Steenberg Semillon 2007, Penfold subsequently leaving the industry altogether.

In other news, Bruce Jack who had founded Flagstone Winery in 1998 on the principles of innovation and independence sold to Constellation Brands, then world’s largest wine company (later to become Accolade Wines). Adi Badenhorst, meanwhile, announced his departure from Rustenberg in Stellenbosch and was soon to be a key figure in the Swartland Revolution.

Waterford, the Stellenbosch property owned by Didata’s Jermey Ord and renowned winemaker Kevin Arnold, completed its 10th vintage in 2007 and there was much talk about the 2004 vintage of the top-end red blend called The Jem selling for R680 a bottle, making it one of the most expensive wines in the country. Current release is the 2011 which sells for R1 100 a bottle.

The category tasting of the month was red blends other than Bordeaux-style and the top performing wines all with ratings of 4 Stars were Anura Maestro 2004, Catherine Marshall Syrah Mourvèdre 2005, Hermanuspietersfontein Die Martha 2005, Lammershoek Roulette 2005, Stony Brook Shiraz Mourvèdre 2005, Swartland Idelia 2004 and Yonder Hill Shiraz Merlot 2004. It is interesting to note that panel gave Columella 2004 (R500 a bottle) a rating of 3½ Stars!

As a member of the panel, my favourite of the bunch was the Lammershoek which I scored 18/20 (the 100-point quality scale still a long way off). It would’ve set you back R90 a bottle whereas the Terravinum Reserve Red 2015 currently available from the Swartland property and which rated 89/100 in this year’s Signature Red Blend Report costs R210 a bottle.

Stellenbosch cellar Waterford sourced grapes from various parcels of age within the district for this maiden-vintage wine, the longest established being 1966 and hence the Old Vine Project heritage vineyard...