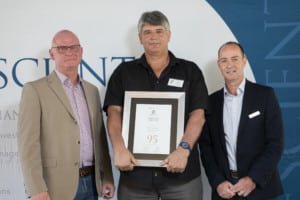 De Grendel’s Charles Hopkins (centre) receives his certificate for best wine overall in the Prescient Chardonnay Report from Christian Eedes and Craig Mockford of the sponsors.

Perhaps the most extraordinary aspect of the modern era of South African fine wine is that the trajectory of the improvement curve remains so steeply upwards, the inevitable plateau period – a time when little advancements in quality are to be had as viticulture and oenology function optimally – showing no signs of manifesting itself to date.

Part of the explanation for this is surely that micro-cellars (vinifying fewer than 100 tons) make up approximately 43% of all producers and have become a powerful force in the industry. Being independently owned allows them to be innovative and pioneering in terms of both production techniques and marketing. A pivotal moment in this process of decentralization might be seen as Eben Sadie leaving Spice Route to go on his own at the beginning of the 2000s and plenty of others have followed suit…

That said, the year started with Distell, by far the country’s biggest producer-wholesaler, announcing the launch of Libertas Vineyards and Estates as a new stand-alone company with ownership of all the premium wine brands. Will this vehicle provide the corporate leadership that has perhaps been lacking ever since the merger between Distillers’ Corporation and Stellenbosch Farmers Winery in 2000?

As ever, high-profile winemakers were on the move. Bubbly specialist Paul Gerber moved to Colmant after being instrumental in putting Le Lude on the map. Elunda Basson left the House of J.C. Le Roux for Steenberg Vineyards, the Graham Beck Enterprises-owned property in Constantia. Distell appointed Andrea Freeborough as head winemaker, her previous position being Nederburg cellarmaster. Lizelle Gerber, in turn, left Boschendal to take over from Freeborough at Nederburg. Chris Williams, winemaker at Meerlust in Stellenbosch since 2004, resigned to concentrate on making his own wines under The Foundry label while Wim Truter, currently KWV chief winemaker, is set to join Meerlust after harvest 2020. Breaking news is that Dirk van Zyl, formerly assistant winemaker at DeMorgenzon, has moved to Saxenburg.

That the wine industry prevails is something of a paradox. The 2019 wine grape crop was estimated as the smallest crop since 2005 – a decline in the area under vine as well as the preceding drought together with fluctuating weather conditions during the growing season given as reasons. Tragically, Stefan Smit of Stellenbosch property Louisenhof was shot and killed in his house in early June. Violent crime perpetuated against farmers remains a hideous blight.

The secondary market got something of a shake-up with Auction house Strauss & Co announcing that it has entered a joint venture with online wine merchant Wine Cellar, and sommelier-at-large Higgo Jacobs, to launch a fine wine auction programme while the long-running Nederburg Auction got re-imagined as the Cape Fine & Rare Wine Auction, in line with the mandate of Libertas Vineyards and Estates to drive the premiumisation of South African wine internationally.

In September, it was announced that Malu Lambert, local freelance journalist and occasional contributor to this site, has won the title of Montblanc Emerging Wine Writer of the Year Award at the Louis Roederer International Wine Writers’ Awards suggesting that local wine writing is not entirely moribund.

The highest winemag.co.za score given in the last 12 months was 98 points, four wines achieving this, namely Alheit Vineyards Huilkrans 2018, Alheit Vineyards Magnetic North 2018, Rall Ava Syrah 2018 and Sadie The Old Vine Series Skurfberg 2018. In terms of our extra-rigorous blind panel tastings, it was an extraordinary year for De Grendel headed up by Charles Hopkins with three wines emerging best in their respective categories, these being Op Die Berg Chardonnay 2018, Op Die Berg Pinot Noir 2017 and Elim Shiraz 2017. To see our top 25 wines of 2019 based on a consideration of quality, availability and noteworthiness, click here.

New to the De Grendel range is Op Die Berg Syrah 2019, grapes from a young Ceres Plateau vineyard some 40km from its existing plantings of Chardonnay and Pinot Noir...