Back in February, Pretoria-based lawyer and wine enthusiast Johan Smuts exhorted me and colleague Tim James on Twitter to review the 2014 and 2015 vintages of the red blend known as Serenity as made by Kevin Grant under his Ataraxia label.

The wines were dispatched, Grant including the as yet unreleased 2016 in order to provide “some semblance of continuity” while he also purposefully did not include any technical analysis for consideration during the tasting and I must admit it is not a wine I’ve drunk very often so therefore was working with very few preconceptions.

Even so, when James and I met to taste, we immediately had a sense that either Pinot Noir or Pinotage or both were involved. Beyond that, what we were dealing with was difficult to say – taken as a collective, the wines were discreet and poised and a good reminder not to be obsessed with variety when stylistic intention on the part of the winemaker is just as important.

And what is Grant’s intention? Post-tasting, he revealed that while Serenity is a blend, it is made in pursuit of a style of a Pinot noir that “works out at the gym” – more muscles and curves than the finesse and elegance might be found in true-blood Pinots.

Whereas Serenity used to be Shiraz-based, Grant has now opted for a three-way blend of 25% Pinot noir, 25% Cinsaut and 50% of cool-climate Pinotage and hopes to stick to these percentages going forward.  It’s an intriguing concept, Pinot noir and Cinsaut of course the “parents” of Pinotage, not entirely original given that Beyerskloof also make wine called Traildust along the same lines but of the two, Serenity is definitely the more serious proposition.

The tasting itself was fascinating. Grant describes 2014 as “unusually challenging” and the wine initially seemed disproportionately evolved, the rim starting to show the first signs of browning while the nose displayed notes of forest floor, malt and meatiness to go with strawberry and red cherry. The palate meanwhile was medium bodied with fresh acidity and an ever so slight bitterness to the finish.

I had the privilege of revisiting the wines on numerous occasions over two days and I have to say that the 2014 held up remarkably well over that period, revealing more and more detail (including some musky perfume) the longer it was open. I eventually settled on a score of 90/100. 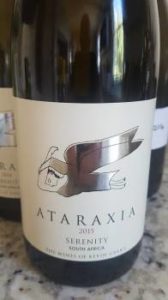 My immediate impression of the 2015, which Grant reminds us was “lauded as one of the best if not the very best in recent memory”, was a step up on the 2014. Riper with more bass and less treble, it was immediately alluring. Black fruit, spice, a hint of vanilla. Curiously, however, its relative lack of blemish made it less interesting to drink the longer it was open and in the end I gave it a score of 90/100, the same as the 2014. This is the current release which Grant advises has a recommended retail price of R185 a bottle.

On to the 2016 which for me was the most accomplished of the three. It has the lowest alcohol (13.08% compared to 13.72% for the 2014 and 14.29% for the 2015) and this serves it well. The nose showed red and black berries, a not unpleasant note of reduction, spice and a rather particular herbal note. As for the palate, this had well delineated fruit – pure and succulent – as well as snappy acidity and crunchy tannins. Grant may be looking for “Pinot with muscles” but this is none too brawny and suggests he may be onto something special with this parent-and-offspring blend. Score: 93/100.