Boschendal go in pursuit of an icon wine 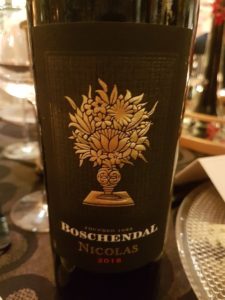 During events carried out simultaneously on the Boschendal estate outside Franschhoek, at the Daytona Showroom in Johannesburg and The Ash steakhouse and bar in Düsseldorf, Germany, DGB yesterday launched a new wine, namely Boschendal Nicolas 2016.

In Franschhoek, the event started at Die Werf restaurant, Boshendal Jean le Long MCC 2008 (R1150 a bottle) paired with savoury macaroons, this served overlooking the food garden. Then guests were transported across the property to old sherry cellar-turned-function room to enjoy Boschendal Elgin Chardonnay 2016 (R475 a bottle) with further canapes before formalities began.

Is it any good? I have to say I found it quite winning.  Red and black fruit, a subtle herbal note, some floral perfume on the nose. The palate is medium bodied with fresh acidity and very fine tannins, the finish admirably dry. Not super-intense but balanced and supple – kind of how you wished Chateau Libertas and Roodeberg still tasted. Editor’s rating: 90/100.

The next question to be asked of Nicolas is: Will it succeed? There’s been something of a debate on winemag.co.za recently as to what constitutes best practice when it comes to building wine brands, specifically whether a focus on terroir or provenance is useful or not. In an article entitled “Does Terroir Matter?”, Tim James writes “The majority of wine commentators are firm (theoretical) believers in terroir, as are many buyers of fine wine. If you want to attract the attention of the former and the dollars, pounds and euros of the latter, then greater attention to regional identity is the way to their hearts and wallets”.

While there are surely many wines that bear out James’s reasoning, Nicolas is not one of them. This is a wine positioned as luxury lifestyle good, aimed firmly at a market segment for which the traditional marketing cue concerning place of origin holds little or no relevance. To DGB’s credit, they have crafted something that organoleptically should not entirely alienate connoisseurs but this is clearly very much directed at the emerging market. I don’t think it’s wrong to see it as a challenge to Boekenhoutskloof’s The Chocolate Block, which is also a multi-variety, non-traditional blend and while certified as being from the Swartland since 2015, was originally never sold on being representative of a particular area. Whether Nicolas will resonate with consumers to quite the same extent as Chocolate Block remains to be seen.