Ever wondered what happened to Vergelegen?

10 years ago, Vergelegen in Somerset West would’ve been considered among South Africa’s top five wine properties by most commentators while currently, few would have it in their top 20. Whether this is entirely fair or not, it demonstrates how quickly a producer’s reputation can rise and fall, at least in the New World. 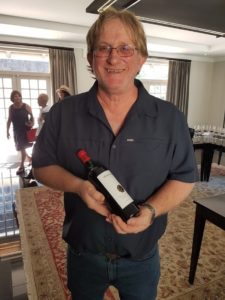 Of course, there is a back story to all of this. Anglo American acquired Vergelegen in 1987 and installed André van Rensburg as winemaker in 1998 who was to enjoy sensational success during the early 2000s.

Unfortunately, Anglo’s original plantings were compromised. Speaking at the launch of a new series of wines yesterday, CEO Don Tooth tells the astonishing story of how a 1.5 ha block of Cabernet Sauvignon infected with leafroll virus was deliberately established in the original planting period of 1987 to 1990 to provide Vergelegen with a “greenness” then thought to be the hallmark of high-quality Stellenbosch reds. Tooth ruefully admits that the lack of knowledge that prevailed then meant that the whole property was to become infected.

Van Rensburg, aware that the true potential of Vergelegen would never be realized as long as virus was a factor, cajoled the Anglo decision makers into a replanting programme that began in 1999 and took some 10 years to complete. “I basically put my career on hold during that time,” he says. Today there are 120ha of virus-free vineyard on the 3 000ha property which surely means that Vergelegen is once again set for great things. Van Rensburg, who is 57 this year, is anxious that he only has three more seasons at his beloved Vergelegen if Anglo insists on mandatory retirement at the age of 60. “I feel like I’ve got at least another 10 harvests in me.”

The new releases consist of three single-vineyard wines, a Merlot and two examples of Cabernet Sauvignon, all from 2014, this being the first vintage that super-consultant Michel Rolland was involved. Van Rensburg is adamant that Rolland’s involvement was never forced on him by Anglo but rather came about at his discretion. “For me, it was about coaxing the very best out of the property. As a winemaker, you develop good and not so good habits over time, and I felt I could only reap benefit from Michel’s experience.”

The Merlot goes by the moniker of The Mistake after Rolland misunderstood volume requirements and instead of putting a blend together of 3 000 twelve-bottle cases, created a 300-case lot (price: R380 a bottle). Matured for 17 months in French oak, 50% new, the wine has a sense of great refinement about it. The nose shows red and black fruit, pencil shavings plus hints of floral perfume and dried herbs. The palate is medium bodied with very fine, supple tannins. Rating: 91/100.

The Last Word Cabernet Sauvignon (R425) is from a 1999 vineyard planted to a late-ripening clone, maturation as above. The nose shows cassis but also some red currant plus fresh herbs in the best sense. The palate is full bodied with again lovely fruit purity but also a more rigid structure, the tannins firm and chewy. Rating: 94/100.

Vergelegen has become known for delaying the release of its wines relative to some of its counterparts. “This is partly philosophy and partly what the site gives us,” says Van Rensburg. “Our wines need serious time in bottle. They typically have good acidities, good pHs and are very tannic which means they stay young and tight for longer.”

Vergelegen (this website's 2021 Winery of the Year) has announced the appointment of Luke O'Cuinneagain as its new winemaker. He will take up his appointment around September this year, following...

The 2022 harvest will be André van Rensburg’s 25th and final as winemaker at Anglo American's Somerset West property Vergelegen. Van Rensburg studied at the University of Stellenbosch, graduating B.Sc....