From the Swartland Revolution to the Elgin Chardonnay Colloquium 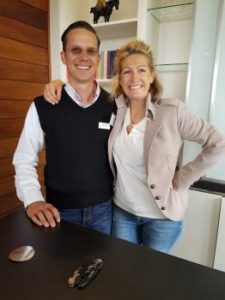 The Swartland Revolution ran from 2010 until 2015, the Hemel-en-Aarde Pinot Noir Celebration took place for the third time earlier this year and the district of Elgin completed its first ever Chardonnay Colloquium this past weekend.

UK wine writer Jamie Goode was guest speaker at the Colloquium and perhaps the key take-out from his address was the importance of “regional brands” that were “self-policed”, strong producers helping to support and uplift those more newly established. It’s such an obvious idea, and worked so well in the case of the Swartland, it’s a wonder that more local producing areas don’t adopt the model. Hats off to Elgin for getting the Colloquium off the ground.

So what went down at the Colloquium? A weekend ticket was R3000 per person (declaration: I was a guest of organiser Wines of Elgin) and the format was as follows: On Friday, a technical presentation by Richard Kershaw MW and local producer followed by a tasting of 16 Elgin wines compared to eight international examples and then a dinner in the evening. On Saturday, your choice of three different morning sessions followed by lunch in the afternoon.

Kershaw said his inclination to work with Elgin Chardonnay was because the cool-climate district was capable of stamping its sense of place on the variety and then went into great detail to demonstrate that Elgin was indeed SA’s coolest wine growing area. In addition, however, he felt that Elgin Chardonnay could achieve world-class status (defined as “comparable to the best”) on a consistent basis.

Kershaw made the further point that 80% of Elgin planted to apples and pears, these some five times more profitable than wine grapes, producers were “compelled to make a really good go of it”.

On to the tasting, which was always going to be the crux of the weekend. Four flights of six, which were served blind, these as follows:

With our sixth annual Chardonnay Report sponsored by financial services company Prescient and featuring many of the above wines from Elgin due out next week, you’ll forgive me if I withhold specific scores and instead make some general observations.

Firstly, the Leflaive and the Boillot were stand-out wines and just about everything else paled a little in comparison. That said, these were the two most expensive in the line-up (according to Wine-seracher.com, the Leflaive currently sells for an average price of R3165 a bottle and the Boillot for R1570) and proof that the market ultimately decides the worth of a wine as opposed to any particular wine critic.

Secondly, Elgin certainly didn’t disgrace itself in the quality stakes (I scored nine of the 16 wines 90 or more on the 100-point quality scale) and when the matter of quality relative to price is introduced into the discussion, it is clear once again that South Africa remains under-priced in the international market, the home-town wines costing between R110 a bottle for the Sutherland and R465 for the Kershaw.

Thirdly, the question has to be asked as to whether or not there is any unifying organoleptic character emerging in the wines of the district and while I think many have a fruit concentration that sets them apart from their contemporaries from elsewhere in the world, I’m not prepared to be more emphatic than that – style, for now, trumps terroir.

Lastly, for all the intellectual stimulation the week-end provided, it was also enormously fun (my lunch at Iona, for instance, involved Blanc de Blanc MCC and Champagne with oysters followed by a 2006 to 2012 vertical of the property’s Chardonnay followed by copious amounts of good Burgundy) and I have a feeling tickets to this event will become as desirable as those to the Swartland Revolution used to be.

What annual event is going to be the next Swartland Revolution?

“Smells like burnt matches” – how much reductions is a good thing on Chardonnay?

At the second annual Elgin Chardonnay Colloquium held recently, the formal seminar culminated in a blind tasting pitching the best of the district against some international benchmarks.  13 wines from...

Andrew Gunn, owner of Iona Vineyards in Elgin, presented the opening address at the district’s second annual Chardonnay Colloquium, containing some heartfelt thoughts on the state of wine farming. Full...