Has SA fine wine arrived? For all the positive reviews we’ve had from the likes of Tim Atkin MW and Neal Martin of eRobertParker.com, it was a disconcerting moment recently when Fortune.com (2.06M Twitter followers) lumped us together with Argentina, Croatia, Greece and Turkey in an article entitled “5 Underrated Wine Countries Around the World” (see here).

It seems to me that while our basic wine quality is no longer in question, our best wines remain under-priced and our branding still leaves a lot to be desired. After a point, the branding issue is less the fault of the wine industry and more the fault of the national government: In a world where many people think Africa is a country and not a continent, has enough been done to promote South Africa as a tourism destination in the most basic sense – nature and wildlife, mild climate, favourable exchange rate? 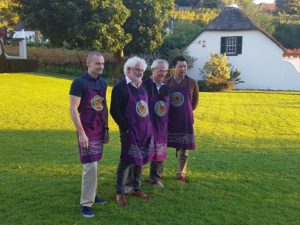 Of course, God helps those who help themselves and I worry that the South African wine industry is still a little short of conviction. It was remarkable that all three international judges at this year’s Old Mutual Trophy Wine Show (critic Michel Bettane and sommelier Eric Goetelmann, both of France, as well as Simon Tam, head of wine for Christie’s in Hong Kong) said to me separately that while they were impressed with basic quality, they thought that the wines were often too “international” in the sense of lacking a discernible South African identity. Bettane was amazed to discover that most of the examples of Sauvignon Blanc would have been fermented using exactly the same commercial yeast while he also suggested that the use of French oak  was making our reds taste generic, not so much excessive new oak but rather the wrong sort of oak…

It was Goetelmann, meanwhile, who suggested to me with a wry Gallic smile that we would never make Chenin Blanc as this is property of the Loire and that we should resurrect the term “Steen”. He wasn’t being completely patronising but was rather arguing that South Africa should take greater proud in its heritage. Of course, the term does  have some unfortunate connotations having originally applied as much as anything to off-dry, entry-level wine and reverting to it would only cause confusion in the market place but Goetelmann’s broader point stands.

It was up to Tam to point out that in many instances the pricing of South African fine wine was too low – an affluent Asian market was simply not going to take a wine seriously if it didn’t have a suitably aspirational price tag.

Another observation that was made during the various judges’ dinners was that we did not seem to be making the most of our Wine of Origin system, many wines having little or no association with the geographic site of the vines that gave rise to them. Surely it was not that appropriate to think of Vergelegen, Morgenster and Waterkloof as coming from the general district of Stellenbosch when they might equally be thought of as being W.O. Helderberg or W.O. Schaapenberg or even W.O. Somerset West? Conversely, how useful to the world at large to have such minute divisions as Hemel-en-Aarde Valley, Upper Hemel-en-Aarde Valley and Hemel-en-Aarde Ridge when W.O. Hermanus (“the whale watching place”) would suffice?