One of the quirks of working in the London wine trade which I am still getting used to after 25 years subsequent to switching careers is the rabid pace at which everyone in the trade operates at from around October until the fireworks of New Year’s Eve. Few people outside of the wine trade truly understand the race to the finishing line that this crucial period has become, particularly in the retail environment but also in the on-trade categories. A successful or unsuccessful fourth quarter for many businesses can often mean the difference between staying in business for another year or possibly closing one’s doors. For the restaurant trade in London, this has never been more true.

So just when you think it’s time to take a break and flick the off switch for a few well-earned weeks of down time, then Burgundy En-primeur tastings descend upon the trade in London. Normally taking place in the second and third weeks of January, this ring fencing of dedicated selling time is probably one of the most significant processes of evolution to impact the London fine wine scene in the past 8 to 10 years as importers and fine wine merchants invite growers from the top domaines over to London to present their prestigious ranges of white and red Burgundy to other trade as well as private clients.

What is so unusual about this dedicated sales period I hear you ask? After all, April has been dedicated to the trade making the annual pilgrimage to Bordeaux to taste the new vintage from barrel ahead of a well-defined offer period between May and July. Yes, but once the actual Bordeaux En-primeur campaign commences, it can take months of false starts to fully get underway as Chateaux face each other off, not wanting to release at cheaper prices than their neighbours. And so the poker game ensues while the London trade sits back and waits for the Chateaux it has tasted and identified as exciting sales prospects, to release their prices at hopefully a workable level for the market. 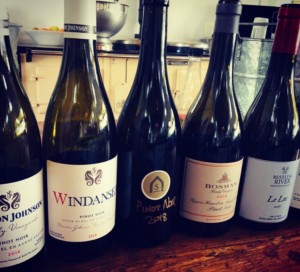 Burgundy producers, like their producing region and small vineyards, just seem to do everything more concisely and precisely than everyone else. If Burgundy sales form a large part of your business, having these two weeks set aside for tasting and selling is invaluable. This year, while racing around the tastings in a cold wintery London, I also looked on fondly at the news reports and photos coming out of the Cape as the Pinotfiles of South Africa descended upon the Hemel-en-Aarde Valley to participate in the annual Pinot Noir Celebration. I was fortunate enough to be invited to chair this amazing weekend event back in 2016, acting as guest speaker and moderator at the large Pinot Noir seminar tasting. But the real wonder of the weekend lay precisely in its incredible focus. Talking, comparing and tasting top Pinot Noir from South African and the best producing regions around the world was the sole name of the game. Full emersion wine tasting.

I know working together in a co-ordinated sales and marketing fashion has never really been one of the South African wine industries strongest talents, but I would like to think we have well and truly turned the corner in this regard since the Young Guns grouped together several years back to pool scarce resources for the greater good of their blossoming wine category. The success that followed is well documented and clear for all to see. Is it not perhaps the right time for South Africa’s best Pinot Noir producers to join arms together, across the wider Cape and offer their wines in a more co-ordinated and orchestrated manner that focuses the minds of consumers and trade buyers? January, before the new harvest kicks off, is surely there for the taking!? Offering Pinot Noir wines En-primeur, pre-release will then be the next natural progression for the most sought-after wines in the Cape. Surely it’s time to take a leaf out of Burgundies book of success!?