Who holds the greatest sway with consumers? Is it the wine journalists or wine reviewers, bloggers or social media influencers? Or is it the wine merchants and buyers plying their trade as they slog across London in hot, sweaty underground tubes en route to yet another tasting in search of new vinous gems? Well, as a fine wine buyer for over 20 years, I wish I could feel confident enough to claim this trophy of influence. But in reality, the more I witness consumer behaviour and the mechanisms of influence in the marketplace, the more I become convinced that the true gate keepers of long term South African fine wine success are the sommeliers slaving away to unsociable working hours in fine dining establishments that really hold the keys to fine wine success in the greater market.

Trust me, it’s hard to denigrate one’s own position of influence in such a manner merely a few weeks after my company, Handford Wines, won the International Wine Challenge South African Specialist Merchant Award 2019 yet again, only to be followed earlier this week by the clean sweep with the Decanter Retail Awards South African Specialist Merchant Award for 2019. Gongs galore, a listings of note and passion and knowledge twinned with thirsty, well educated, obliging loyal clients. Certainly, these are achievements to be proud of and do undoubtedly resonate with consumers. But I have also been involved in judging the triennial Wines of South Africa Sommelier Cup UK edition for the past 12 years since its inception and I have witnessed first-hand the positive changes in attitudes and the increased knowledge and enthusiasm towards South African wine of sommeliers entering this competition over the past decade. 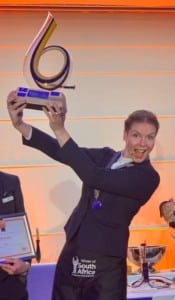 However, this year was different. The UK candidate that we finally awarded top spot and chose to put through to the prestigious final in Cape Town at the end of September, Richelle van Gemert, actually went on to win the overall competition described as ‘an epic battle of skill, concentration and attention to detail’ … and so gave the UK its first overall winning candidate since the competition’s inception. How can one possibly measure the incredible goodwill, positivity and longstanding influence this group of 25 visiting sommeliers from around the world will have on potential consumers for years to come once they take their knowledge and experiences back to their home countries and back to their places of work, be they hotels, bistros, modest restaurants or top-end Michelin starred establishments? Only then will the whole journey and investment in hospitality, entertainment, culture and competition be translated into a long-term gain for the South African industry. Learning and experiences can never be unlearnt or reversed. The veil of fine wine quality will have been lifted forevermore.

Being a wine merchant and hence an avid student of retail marketing and consumer psychology, I am more aware than most that one of the greatest powers of purchasing persuasion, if not THE greatest, be it in a restaurant or a retail environment, is the power of peer group referral or recommendation. For consumers often overwhelmed by the wall of international wine offerings in a retail environment, to have that nugget of gold in the form of a mate’s suggestion or a colleague’s ‘sure thing’ certainly becomes a very powerful purchase influencer. However, remove the visual cues, the pretty labels, unique bottle shapes and grape varietals and add pages and pages of vinous text and suddenly a well-endowed wine list tomb becomes possibly one of the most intimidating assault courses a thirsty diner can possibly encounter. Enter the savvy sommelier brimming with a proverbial pocket book of wine suggestions and the power to influence is almost unlimited.

I don’t embellish the art of the sommelier as some form of weird wine merchant self-flagellation, but rather because I witness on a daily basis, the growing enthusiasm of consumers to eat out more and more while drinking an increasingly adventurous array of food-friendly wines that offer both quality, value and importantly a high degree of integrity backed up by a genuine,  easily communicable background story. South African wines currently offer all of these attributes in bucket loads. With recent research suggesting that Britons now eat out on average twice a week, almost a third of respondents to a recent OpenTable survey said that dining out was better value than making meals at home!

Winning over the mainstream sommelier to the South African wine cause magnifies the opportunities for producers prepared to follow up with added staff training, wine trips, sampling and tutored tastings. If South African producers can make their wines as indispensable a part of a working wine list as many French wines have done over the decades, the ceiling of success may well be limitless, but more importantly, long term!