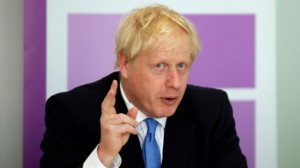 UK prime minister Boris Johnson faces a challenge in bringing about an exit from the European Union.

Wherever you are in the world these days, there seems to be a prevailing attitude of doom and gloom by a large segment of the population. Whether one can, or indeed should, point the finger solely at millennials and the snowflake generations for this “end is nigh” outlook is debatable. But what is clear though is that the current younger generations almost certainly face the greatest long-running period of prosperity and peace known to mankind. So why all the dystopian attitudes and anxiety about all this impending doom in the world? When you encounter an American, they cower in the shame and embarrassment of Trumpism and the popcorn politics of the United States. Speak to anyone in Europe and you can basically take your pick of crises to denounce across the continent from the rise of nationalism in Italy to the foibles of Brexit in the United Kingdom.

South Africans, too, seem stuck in a very self-defeating mode that seems to ignore the positive advances the country has made in the past 20-plus years. Yes, of course, every generation needs battles to fight and causes to champion, and indeed the country faces many real economic and political challenges, but we should never lose sight of where we have come from and where we are today. Winemakers in South Africa often labour under a self-imposed sense of hardship and adversity when the reality is that the basic conditions for doing business have never been more conducive for success. But needless to say, we are perhaps finally starting to witness a tightening in the UK wine market – and a more basic, industry-wide examination of what products sell, which business categories are profitable, the importance of supply relationships and the long-term partnerships that can make or break many producers in this market.

London remains the ultimate contradiction, being at once one of the most lucrative, dynamic, complex, international and forward-looking wine markets in the world, but also one of the most ruthless and one where it is difficult to realise sustainable margins on a long term consistent basis. But, of course, there are many success stories. The UK market is big, broad and hungry and the most dynamic quality producers from South Africa continue to deliver a sizable quantity of high-value stock into the market. This September will once again see the “New Wave” producers descend upon the UK to promote their fabulously exciting wines in a massive generic South African tasting. But they will do so in an environment that requires far more brand certainty and quality awareness, producer and winemaker confidence and vision, price competitiveness at multiple tiers and a real sense of long-term commitment to various market segments.

Anecdotally, the bottom end of the UK market has and is shrinking between minus-7% and 9% per year while the more premium categories above the middle ground continue to grow at between plus-10% to 12% per annum. So the news is not all bad. We should not be getting our noses bloodied on the playing fields of the entry-level market anyway. Unfortunately, the on-trade restaurant industry which has been one of South Africa’s most lucrative and bullish champions over the past five years is now in the midst of a proverbial mini-blood bath with a culmination of uncompetitive business rates, ridiculously high rents, rising staff costs and significantly lower consumer spending due to the dampening of sentiment by Brexit inertia leading to a survival of the fittest scenario in many parts of London and the South East / South West.

But unlike the Lehman crash years of 2008 onwards when the market took a notable downturn and consumers automatically sought sanctuary in safe products like the classics of Sancerre and Pouilly Fume, Chablis and Bordeaux, today we are not seeing the same migration back to Old World safety. Bordeaux bashing abounds once again after a very pricy En primeur campaign, Burgundy continues to lead everyone inevitably to throw their hands up in the air in despair and Italy and the USA, both fantastically popular regions, are witnessing massive price spikes that coincide with both rising demand and rising quality. But as ever, South Africa lurks in the background, the safe alternative for not only consumers in the off-trade but also for consumers in the on-trade. Now more than ever, South African producers and importers need to ensure that their proposition remains competitive, dynamic, accessible and most importantly capable of delivering a sustainable margin and profitability for stockists.

Opportunities abound for the bold and adventurous – a successful examples is Stellenbosch producer Simonsig, a classic example of a heavyweight South African producer shipping to the UK themselves and distributing premium products to the market directly at incredibly sensible prices by cutting out a middleman. Bonding your own stock in the UK is never a cheap endeavour, but if you can reach a point of critical mass with distribution, the world becomes your proverbial oyster. Johan Malan and colleagues should be congratulated for their efforts in blazing an independent trail in the UK.

While there are certainly storm clouds around, both in South Africa and in the broader European wine market, these clouds will of course clear in due course and those who survive the famine and drought to await the rains on the plains, will reap unknown treasures at the end of the rainbow.