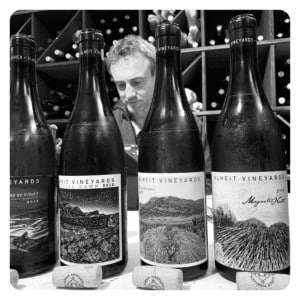 Variety, they say, is the spice of life. When it comes to wine reviewing and wine critiquing, I’d argue that it’s even more important than that. This past week has been an enlightening few days as I rolled up sleeves to help host internationally acclaimed wine reviewer Neal Martin’s first South African new-release “snapshot” wine tasting for his next Vinous.com South Africa report post his quadruple bypass heart operation earlier this year. Admittedly, this important exercise certainly would not have been possible without the work of the UK’s Wines of South Africa (WOSA) head, Jo Wehring. Short-staffed due to maternity leave and invariably under tight budgetary pressures as always, all barriers were easily overcome by Jo as she helped move mountains to co-ordinate and organise this critically important tasting.

While special mention must, of course, be made to the impressive and professional encyclopaedic volume of wine industry analysis and wine reviews published by industry commentator Tim Atkin MW in his recently released South African Wine Report 2019, clearly, helping to facilitating yet another body of detailed analysis from arguably the world’s most important and influential wine critic in the post-Robert Parker era was not only a crucially important exercise to benefit consumers but also one that merited mountains being moved to ensure South Africa’s incredible fine wine producers receive as much positive promotion as humanly possible. And as if two reports on the state of play in South Africa wasn’t exciting enough, the industry has the new Wine Advocate’s South Africa reviewer’s first report due out imminently as well. A tsunami of scores, reviews and must-buy wine lists to digest.

While helping to co-ordinate this Vinous.com tasting, there was a lot of chatter on the general state of play in the South African wine industry but also on the high quality of wines coming out of South Africa. As a wine merchant based in London, I’m fortunate to get to work with a number of international generic wine promotion bodies during my day-to-day buying and selling activities. But one feature that really stood out in our conversations was the sustained high profile that South African wines have managed to maintain over the past five to six years. In marketing parlance, I’m confident to say that the persistent level of consumer and trade interest in a single country wine category is almost unprecedented. The closest similar “phenomenon” if I can call it that, was probably the golden decade of Australian wine promotion magic starting in the late 1990s and continuing until the financial crash of 2008.

With major industry players and brand owners, who often contribute a disproportionately greater amount of funds to generic promotional budgets, always trying to flex their collective muscles to dictate the direction and tone of the overall generic marketing message, it’s easy to see the many areas of potential conflict that can arise when attempting to appease all stakeholders. Certainly, Wines of Australia’s attempt in the mid-2000s to move their generic wine promotion message focus from one of Brand Australia to one of regionalism, boutique heroes, wine icons, the cult of cool climate winemaking, the up-and-coming young guns and general producer diversity and innovation, was a message that resulted in heads rolling and massive internal industry upheaval as keystone conglomerates refused to back this direction of travel. By the time the global financial crisis hit in 2008, the writing was on the wall and Australian wine promotion was relegated to a decade long dark winter of discontent with a directionless rein of chaos.

But what’s the relevance to South African generic wine promotion you may ask? Well of course, the hugely successful style, tone and message of quality, regionality and boutique diversity is the precise message that has ensured South Africa’s “favoured nation wine status” and popularity over the same corresponding five to eight years in the crucially important UK export market. I said it a decade ago and I’ll say it again now, it’s the trickle-down halo marketing of regionality, the cutting edge young guns, the new ground-breaking regions and the boutique quality that drives a seductive, alluring marketing message. All that needs to accompany this message are a wide array of tantalisingly innovative wines of exceptional quality and the recipe is set for sustained, long term success. The trickle-down benefits will undoubtedly translate into rewards and opportunities for all South African producers including and especially the bigger generic brand owners. That’s the wonder of the ‘halo effect’ in marketing.

As Wines of Australia ironically returns heart and soul to its message of regionality, diversity and boutique heroes as the only sustainable and effective way to market their evolving wine styles to new millennial drinkers, let’s hope South Africa can remain the marketing leader with its innovative producers, genuinely engaging background stories, their industry modesty and humility and above all, the ever increasing wine quality for both reds and whites. The publicity crown is ours and there is no reason why we should relinquish it any time soon to Australia, New Zealand, Chile or Argentina.