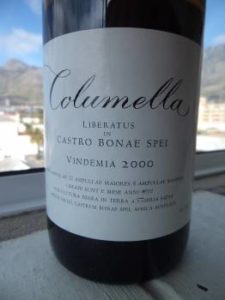 How is the maiden vintage Columella 2000 from Eben Sadie faring? Bar a single bottle still remaining in my late dad’s cellar, I’m not sure there’s any left to take a view on. Recently, there have been a number of articles by prominent commentators suggesting that wines are now made for earlier drinking and the discussion about age-worthiness is becoming irrelevant.

Various reasons are put forward for this. “Some of this conversation [about diminished ageing potential] is fuelled by climate change, that warmer vintages lead to enhanced ripeness and in turn to readier accessibility, some of it by the assumption of impatience – that the newer generation of wine drinkers is disinclined to defer gratification,” writes local critic Michael Fridjhon in an article entitled “Will today’s vintages stand the test of time?” which appeared on BusinessLIVE.co.za on 13 January.

Picking up on the issue of consumer desire for a quick fix, Matt Walls writes in an article entitled “Coming of age” which appeared on TimAtkin.com yesterday that “(w)ith the growth of Uber, Netflix and even wine apps such as Drop, much has been made of the ‘on-demand economy’. What we want, we want now. Since most wine is shipped shortly after bottling, that’s when it usually gets drunk, so it needs to be delicious on release. Waiting for a decade or two before your wine is drinkable feels like the behaviour of a bygone era.”

Then there is the issue of storage, with Wells observing “The dynamic nature of the restaurant scene might also be driving this trend. According to Harden’s Restaurant Guide, London saw more new openings in 2016 than any other year since its records began in 1991. Finding restaurants or wine bars with cellars for ageing wines is increasingly rare, and not just in the UK. As inner city rents spiral, its simply not a cost-effective use of space. The same is true for high street wine merchants. And for private homes. I’m not sure exactly who is ageing wine in the UK these days.”

I’m less despondent than either Fridjhon or Walls about the demise of wines made for ageing. Firstly, I think age-worthiness remains a key determinant of wine quality in the minds of wine enthusiasts – whenever casual conversation turns to who is making South Africa’s best wine, maturation potential always comes up as being important. The problem is that while the wines of the 1960s and 1970s are eulogized (bottles of GS ’66 and ’68 opened with monotonous regularity in certain circles), nobody is looking at the wines from the 1990s and 2000s with any critical rigour.

Next, the argument is often made that “power and concentration are out; freshness and drinkability are in”, with the former a prerequisite for age-worthiness and the latter a preclusion, but this is a bit of a false dichotomy in my mind. Wines which I have been able to follow from release into brilliant maturity like Kanonkop Paul Sauer 1995 never started out particularly big but rather always had the inherent structure and balance to ensure great drinking over a long period.

Of the current state of play, Fridjhon writes “What is certain is that there are precious few current release South African reds that I’d be happy to keep for more than 10 years after the vintage and almost none which would profit from that kind of extended ageing [of 50-odd years].” Again, I think this is unduly pessimistic – whether you are buying wine to take advantage of the emerging secondary market or purely for enjoyment, then there are more than enough options for the astute collector from Kanonkop to yes, Columella with something like Mveme Raats de Compostella in between.

What I would suggest, however, is that those producers who aspire to the very top of the quality pyramid hold library stock back and be more inclined to showcase under the right circumstances.